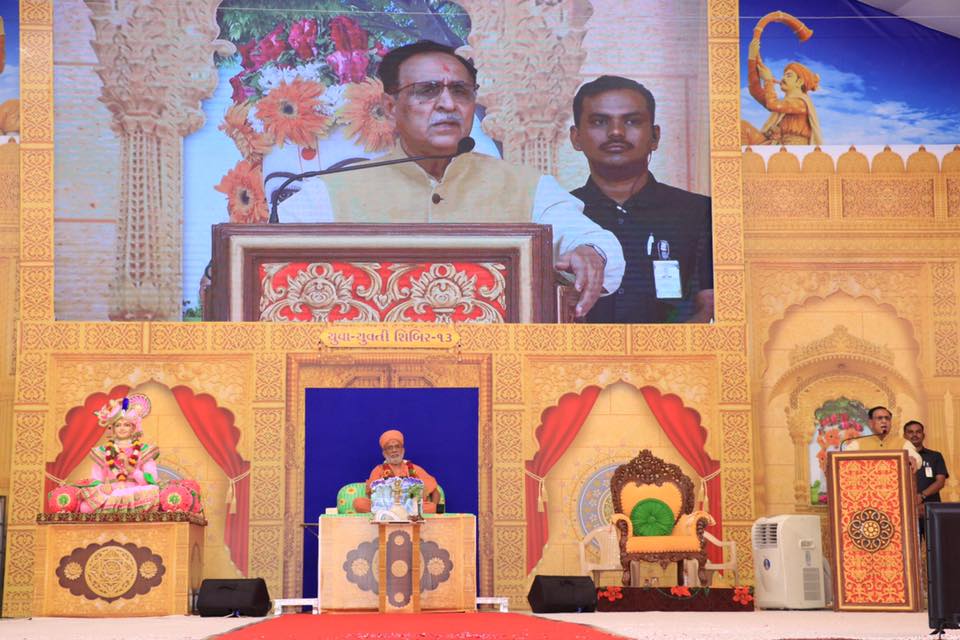 Said people will reply with their votes

“Didi lost her mental balance and tarnish the democracy by her Didigiri in West Bengal. The people of Bengal will give answer to all the hooliganism and don’t accept such things,” said Gujarat CM Vijay Rupani during his visit to Vadodara for a religious function. He also put focus on Urea, water shortage and other matter during the interaction with the media.
Rupani was in Vadodara for a youth convention held inside Karelibaug Swaminarayan temple. Many religious and spiritual leaders remain present there to inspire the youth coming from various cities. A book titled ‘Spiritual Leadership’ was also launched by the CM and other dignitaries during the occasion. The book was originally written by American Management Guru Satinder Dhiman and translated in Hindi and Gujarati. Rupani said such programmes will help the youth to move towards patriotism and nationalism and help the nation to grow.
On Urea matter he said the investigation is on to find the exact cause of low volume inside the 50kg bags. “GSFC is supplying the urea bags to farmers for years and this year during the investigation we found around 250 to 245 grams less in the 50 kg bags. The selling is immediately stopped and investigation is on to trace the exact reason. The bags will be repacked and deliver to the farmers and everything will be normal soon,” said Rupani.
On water problem in Vadodara he said the responsible will not be spared and strict action will be taken against them. The water issues across the state will be normal soon after the repair of pipelines and canals.
Finally attacking West Bengal Chief Minister Mamta Banerjee he said Didi lost her balance and the people of Bengal will give their answer this time. They will not accept the hooliganism and give answer with their votes. He also said that Didi knows that she lost the ground this time and TMC will be finished in coming days in West Bengal.