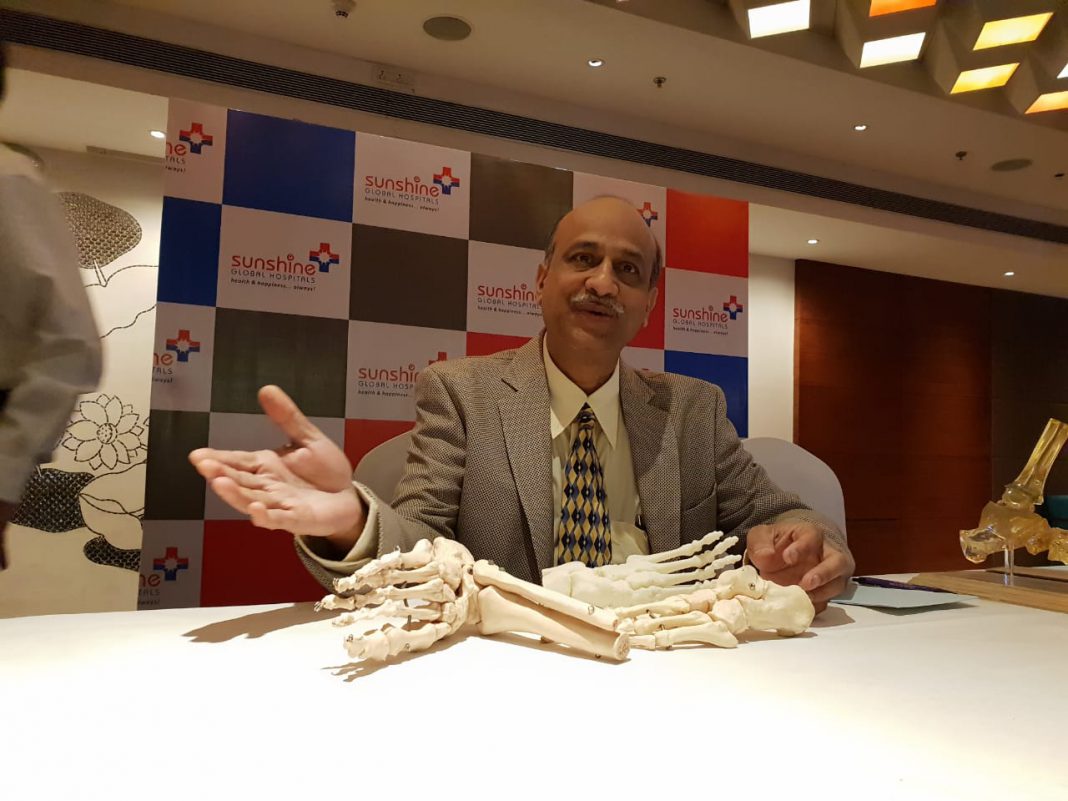 It’s a proud moment for Vadodara as a city base orthopedic surgeon performed world’s first ever ankle’s complex surgery. With the help of 3D printing technology he successfully implant the titanium talus bone inside the right foot of the patient.

The surgery was performed in Sunshine Global Hospital on a youth from Chhotaudepur badly injured in a road accident. The ‘talus’ bone located between the ankle was ripped out due to the impact of the accident and Dr. Rajiv Shah performed the complex surgery using a new innovative technogy.

“The bone located between ankle, commonly known as “talus” is an important bone and if injured permanently, either it makes patient’s foot fixed at 90 degree angle or leg below the knee has to be amputed. Approximately two and half months back, patient named Surtan Rathwa of chotaudaipur was brought to Sunshine Global Hospital in critical condition after an accident. On examination, we confirmed that the talus bone of the patient’s one of the legs was not in place due to severe accident. The option left was amputation,” said Shah.

Looking at the situation Dr Rajiv Shah adopted critical thinking approach to save the patient’s leg from amputation. “We realized the current booming concept of 3D printing technology which can prepare few body parts with titanium and fitting that in human body as a probable help to us. Although this has never been tried in patient having critical condition and losing a body part in accident, with a positive mind we put this innovative thinking into practice. I initiated the 3D scan of the normal talus bone of the other leg of the patient and got the titanium talus bone developed,” said Shah.

Meanwhile the next day the patient’s relatives handed over the injured and ruptured talus bone part to the doctors. However Dr Shah adopted the 3D scan and got the titanium talus bone developed. To maintain the normal condition, Patient’s ankle part was filled with a special kind of cement, till the talus bone is developed.

“After about one and half month we receive the titanium talus bone and it was replaced in place of cement in patient’s ankle through a complex surgery. Months after the surgery the patient is able to move and will support his family after such a life threatening accident,” said Shah.

The innovative surgery by Dr Rajiv Shah has opened many medical gateways for Orthopaedic surgeons across the globe. He has also been invited as expert Foot and Ankle speaker at various international forums and with this successful surgery he has started getting invitations around the world.