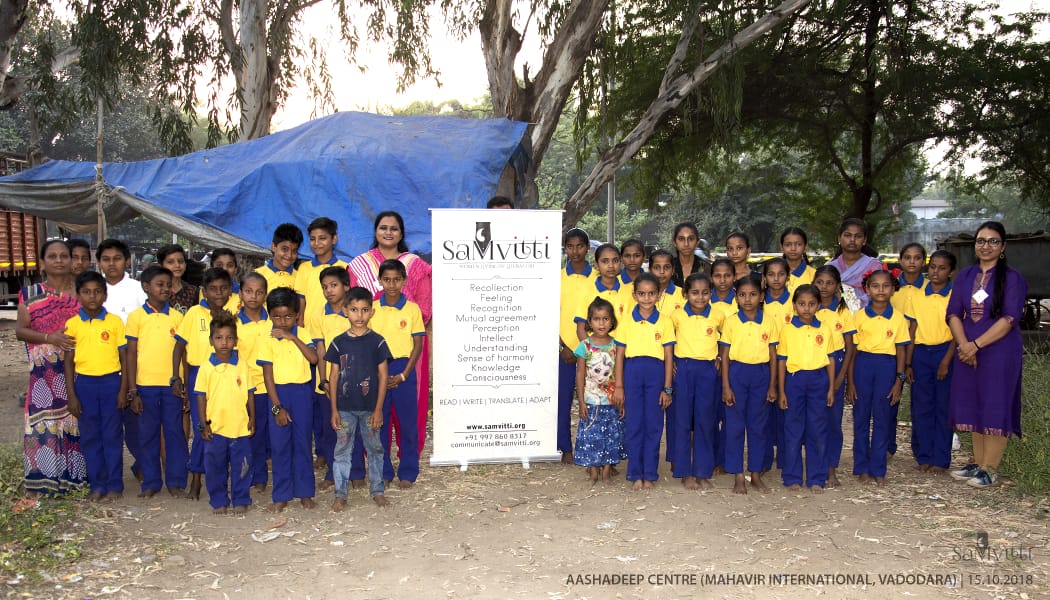 Learn to help and be kind to all living beings

SahityaMitra Naina Parmar from SaMvitti foundation narrated the story of selfless friendship between human and animal to the little children of Aashdeep Centre of Mahavir International in Vadodara. The session gives the positive message of friendship to the young ones and help each other in need.

The story 'Jumo Bhisti' written by Gaurishankar Govardhanram Joshi 'Dhumketu' was narrated with great energy and joy by Naina Parmar to the children.

Jumo, the protagonist of the story, once when he was wealthy, had kept a bull as a pet for his liking. The bull was named ‘Venu’. Jumo, from once being wealthy, within a tide of time, becomes poor and all his relatives desert him, but not Venu. He often talked his heart out to Venu, and Venu in comprehension, shook his head.

In the mornings Jumo supplied water to people’s homes, and whatever money he earned, he bought vegetables for himself and grass for Venu. All through the way he sang songs or ‘gazals’ and Venu walked along chiming the bell tied around his neck. From noon till evening he smoked hookah and Venu rested. This was their everyday routine.

One fine day Jumo took Venu along for a frivolous stroll. Venu in his playfulness ran ahead and reached at a railway crossing. Jumo did instruct him to wait but Venu just kept running ahead. Suddenly Venu’s leg got clamped in one of the tracks and it was almost time for the train to come. Jumo got frightened and tried to seek help, but all in vain. As he wasn’t able to find help, he was saddened, and decided to end his life as-well along with Venu.

As the train closed-in, he told Venu, “We have lived together, and we shall die together”. But, as the train arrived, Venu pushed Jumo out of the train’s path with his head and eventually lost his life. Now Jumo was left all alone. He visited Venu’s grave every day to offer flowers and cried-out thrice - Venu…Venu…Venu.

The children relate to the emotion of a true friend like ‘Venu’ and felt Jumo and Venu’s friendship was like the friendship of Krishna and Sudama. They also discussed about being kind to all living beings.