Participants find it a good idea to confess their mistakes by writing it down For SaMvitti ‘Sharing Story’ initiative SahityaMitra Seema Trivedi Varia shared a chapter from ‘The Story of My Experiments with Truth’ autobiography by Mohandas K. Gandhi with the young girls of Shree Haribhakti Raneshwar Vidyamandir in Vadodara. The session had a narration […] 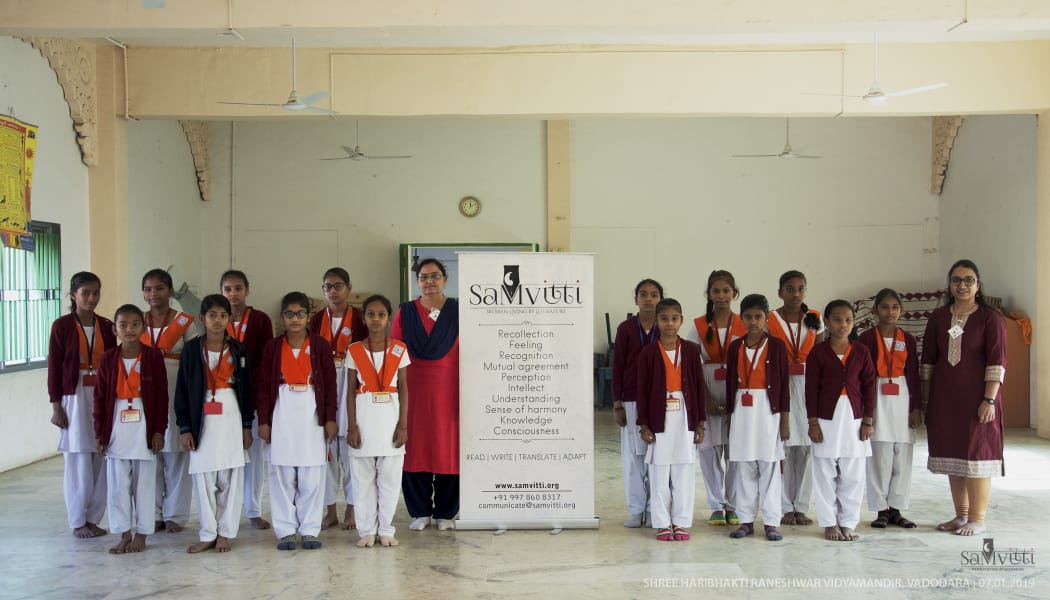 For SaMvitti ‘Sharing Story’ initiative SahityaMitra Seema Trivedi Varia shared a chapter from ‘The Story of My Experiments with Truth’ autobiography by Mohandas K. Gandhi with the young girls of Shree Haribhakti Raneshwar Vidyamandir in Vadodara. The session had a narration of two incidences from the life of Gandhiji.

The session was initiated with the discussion about what all have the participants heard or read about Gandhiji. They had heard the stories related to the freedom struggle, but these stories were new to them.

In his childhood, Gandhiji and one of his relative had a curiosity to get an experience of smoking. Not that they saw any good in smoking, or were enamoured of the smell of a cigarette. They simply imagined the sort of pleasure in emitting clouds of smoke from their mouths. They had seen his uncle smoke in front of them, and they thought they should copy his example. But they had no money.

So, Gandhiji and his relative then decided to collect used cigarette stumps to give it a try. The stumps however, were not always available, and could not emit much smoke either. In those days, there used to be a servant working in Gandhiji’s house. Both (Gandhiji and his relative) decided to steal money from the servant’s pocket and buy cigarettes. They stole the money, bought the cigarettes and experienced it. After experiencing it, they both realised that they had stolen money and it was a bad habit.

The second story was about Gandhiji and his cousin. His cousin used to wear a heavy golden armlet. This brother of his had run into a debt of about twenty-five rupees. To pay the debt, Gandhiji decided to clip few grams of the golden armlet. After doing so, he again felt guilty of stealing. He resolved never to steal again.

Gandhiji decided to confess his deed to his father. But he didn’t have the courage to speak to him. So he decided to write it on a slip of paper and hand it over to him. The note not only had the confession of his guilt but also asked for an adequate punishment. His father was suffering from a fistula and was confined to bed. When his father read the letter, he cried. Because of his tears, the letter got wet. For a moment he closed his eyes in thought and then tore-up the note.

Seeing this condition of his father, Gandhiji decided not to do anything wrong in his life. Those pearl-drops of love cleansed his heart, and washed his sin away. Only he who has experienced such love can know what it is. As the hymn says: ‘Only he who is smitten with the arrows of love, knows its power.’

At the end of the session, participants wrote a letter addressing to SaMvitti and in which they confessed about their mistake which they could not convey to anybody else. One participant got inspired to share a story which she had heard about Gandhiji.