Champaner: Where every wall bleeds history

My inexplicable and inexorable fascination for ruins and relics, as dark as they might seem, has exposed me to some of the most incredible places across India. One of such experiences came from my recent trip to Champaner. Once a prominent royal kingdom, Champaner now stands as a UNESCO World Heritage Site and has been […] 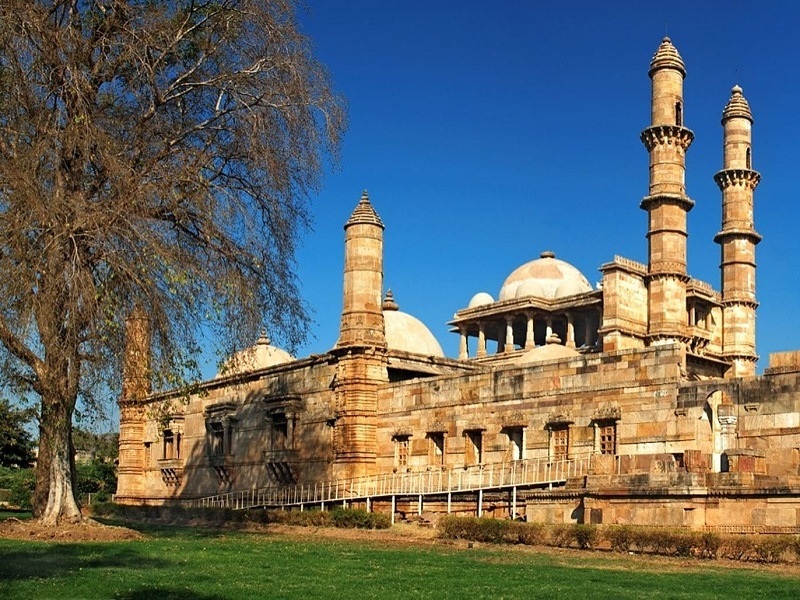 My inexplicable and inexorable fascination for ruins and relics, as dark as they might seem, has exposed me to some of the most incredible places across India. One of such experiences came from my recent trip to Champaner. Once a prominent royal kingdom, Champaner now stands as a UNESCO World Heritage Site and has been turned into a massive archeological site.

Traveling around Gujarat is best done in the colder months, so I planned my travel in February. I booked a cab from Ahmedabad to Champaner and reached in less than three hours. The history of Champaner is often paired with its twin town, Pavagadh, and together they form the present-day Champaner-Pavagadh Archaeological Park.

Champaner at a glance

As one would often expect, I always imagined this place to be barren and austere. But as the car approached the site, I was pleasantly surprised at the refreshing views with ample greenery and warm vibes. I was greeted by the dense foliage of the Jambugodha Wildlife Sanctuary and views of the Pavadagh Hill, with sandstone structures peeping through the trees off and on.

I finally landed at the archeological site – a concentration of historical and cultural monuments, each exquisitely portraying their derelict form across the impressive landscape. Spread across the foothills of the 800-meter high, volcanic hills of Pavagadh, the site was a stunning visual, harmonizing natural beauty and man-made wonders. The first glance at the place told me, that every brick, every corner, every frame of this place has a story to tell, only if we could listen.

Champaner has some serious, detailed history. It is quite evident from the remains that we see today, which date somewhere between the 8th and 16th century. The expansive site of myriad ruins reflected administrative buildings, mosques, temples, and forts. The higher number of religious sites told me that this was once a popular pilgrimage destination.Avail a reliable car rental in Ahmedabad with an experienced driver to make the most of this trip.

A page from the past

They say the town derived its name from the volcanic rocks that resembled the flame of the forest flower, locally called Champak.

When the Rajputs acquired the seat of Champaner in the 14th century, they made this the capital of Gujarat. They ruled the twin-kingdom for almost 200 years. But most of the town’s architectural contribution came from Sultan Mahmud Begda, who defeated the Rajputs and ruled Champaner for only two decades. At that time, the place was known as Muhammadabad, only be to later taken over by the Mughals. Thus, the capital of Gujarat moved to Ahmedabad, and Champaner and her twin, Pavagadh remained left behind, at the mercy of time and tide, only to be engulfed by forest cover.

But when Champaner had been in its golden days, it flourished as a trading post and an influential state, with a strategic location, which I could see in the way every piece of architecture was made. 50 years of archeological excavation has unearthed more than 39 monuments, each of which is a beautiful blend of Rajputana, Islamic, and Jain architectural style. This also told me that religious tolerance and secularism was ingrained within the community.

The highlight of the site was the Citadel, comprising monumental mosques, built with the most artistic blend of Indo-Islamic and Hindu-temple style architectural elements.

I moved on to the Jama Masjid, sitting right outside the Citadel’s east gate. Elegance on stone, the ancient mosque boasted a finely carved stone porch, with a probable dome, which seemed to be missing. A pillared corridor led to a landscaped courtyard, where tombs of saints and kings perhaps rested peacefully. The interiors of the mosque portrayed both Islamic scriptures and Hindu religious motifs, making it a one-of-its-kind monument. After admiring the intricacy of the mosque’s architecture, I continued to explore more around the site.

Champaner was once known for its meticulous civic planning, perhaps a hundred times better than many modern cities of India. As I wandered around, I saw the fortifications, step wells, bastions, agricultural structures, reservoirs for irrigation, harvesting structures, silos, and much more, that should be an integral part of any town plan.

The sun had started to mellow down, which made me want to wrap up the tour soon. I decided to cover the Pavagadh Hill before the day ended. At 1500 feet atop the hill, sat the ancient temple of Kali, which is still considered sacred among locals. There was a cable car that took tourists from Champaner to the hilltop.

A mud path at the base of the hill led further to the second most fascinating thing that I saw that day. The Seven Arches or Saat Kaman was an interesting structure with a series of sandstone arches. The incredible thing about the construction is that the stone blocks are fitted together without any cement (it wasn’t even invented then) or any binding agent. The setting sun slowly cast its glow on the yellow sandstone, which shone like blocks of gold against the grey, evening sky.

From the viewing ledge, I looked over to the sleepy town below, trying to visualize people working at the fields, soldiers prepping at the army camps, traders hustling fares, each going about their day, with no idea whatsoever that hundreds of years later, people would unearth their past and get to know their lives.