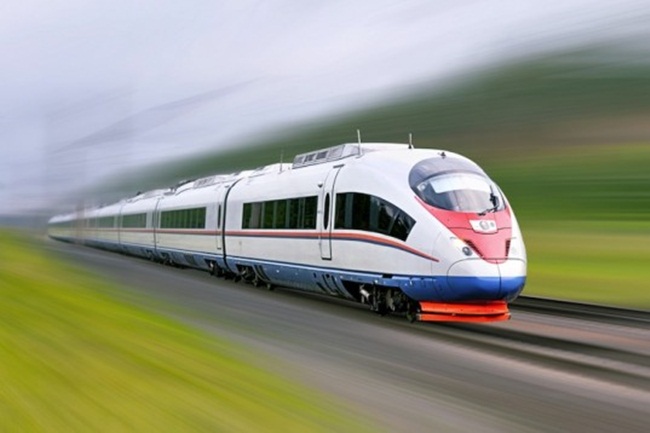 508 kms long Mumbai-Ahmedabad High Speed rail Project(Standard Gauge) at an· The salient features of the Project are : ·Background:
estimated completion cost of Rs 1,10,000 crore. Out of this Rs 1,10,000 crore, Japan is giving a loan of Rs 88,000 crores.

Interest on this loan is minimal i.e. 0.1%, and this loan is to be repaid to Japan in 50 years. Loan repayment period of 50 years with 15 years grace.

In the first phase, the bullet train will cover 508 kilometres between Mumbai and Ahmedabad.·

There are 12 stations proposed between Mumbai and Ahmedabad – Mumbai, Thane, Virar, Boisar, Vapi, Bilimora, Surat, Bharuch, Vadodara, Anand, Ahmedabad and Sabarmati. If the bullet train will stop at 12 stations then it will cover the distance within 2 hours and 58 minutes.·

The distance will be covered in 2 hours·  Of this route, 92% of the route will be elevated, 6% in tunnel and the rest 02% will be on the ground.· The operating speed of the bullet train will be 320 kilometers per hour and maximum speed will be 350 kilometers per hour. ·and 07 minutes by the bullet train if it stops at four stations namely Ahmedabad, Vadodara, Surat and Mumbai..

Transfer of technology for construction and also for manufacture of rolling stock,·
systems and other components in India to promote ‘Make in India’.

Implementation of the project by a new Special Purpose Vehicle on the lines of DMRC with equity participation from Ministry of Railways, State Government of Maharashtra and Gujarat to implement the project.·

A new entity National High Speed Rail Corporation Ltd has been formed to implement the project in February 2016.·Latest Status

More than 10 officials at middle management have already been joined NHSRC on deputation.· Appointment of MD has been done. Shri Achal Khare has taken over the charge on 20.04.2017. Process for appointing other key Directors has also been initiated. ·

An MOU with JICA has been signed on 23rd December 2015 for the follow up studies by JICA on technical standards, regulations, station area development, review of Final Location Survey, safety and human resource development. The studies have started from March, 2016 and will take approximately 20 months to complete.·

High Speed Rail Training Institute in the State of Gujarat is proposed to be setup. The Ground breaking ceremony is proposed to be held in this year. The two land plots ofapproximately 42,000 sq. meter under Indian Railways has already been earmarked for the project near Gandhinagar City Railway Station.· General Consultant has been appointed outside the loan to prepare Design documents, bidding documents and technical standards and specifications. ·

Tender for the work of slab track at Training Institute likely to be finalized shortly.·

Ahead of Independence Day, President Kovind to address nation today at...