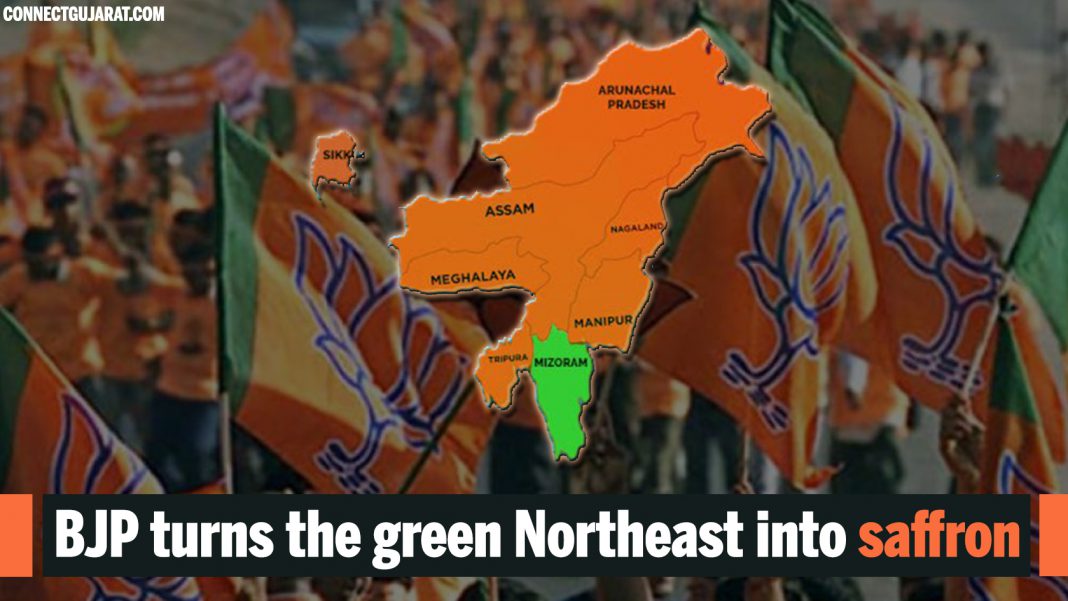 India is turning saffron under the reign of BJP after the Maratha Kingdom. The BJP led NDA government has captured almost the whole of North India. The North East and the region below the Deccan Plateau has been some of the regions that the BJP has been unable to set their footprint. The recently concluded elections in the North East of India ended on a note that the BJP had set its fort there too. Thus, BJP now has its influence over 25 states in India in the form of direct governance and allied.

North East of India and BJP

The states in the Northeastern portion of the country are known for its much greenery and beautiful scenic locations. It has been immersed in the blood of Communistic principles for long. The states haven’t seen much of development in spite of the party that was in rule had been in powers for decades. This is indeed a victorious win for BJP as the last elections BJP could not even secure 2% of the votes in Tripura. Now, the party has swept majority. The same is the case with Nagaland. The party had the backup of the BJP emerged as the forerunner in the elections formed the government. In Meghalaya, though Congress had won a large number of seats, it was closely followed by other small parties. Thus, the other parties had acollision with the BJP and decided to form the government. Thus, Congress was happy that it could capture one fort, failed miserably. There were many rumors and claims that BJP being an immigrant unfriendly and having Hindutva mindset could not win over the Christianity dominated states. The idea was proved wrong with the massive voting.

Why did people lose trust in the previous government?

The previous government had been given plenty of time by the citizens hoping that they would bring in some good changes for the sake of development. The government failed to utilize the precious resources that the place has and the hardworking human resource. Thus, the people of the Northeast had been under the influence of a leftist government decided to give a chance to the right.

This is indeed a great chance for both the BJP and the people of the Northeast to utilize the fullest of the quality materials in their state and to have patterns of growth and development as a model for other states.