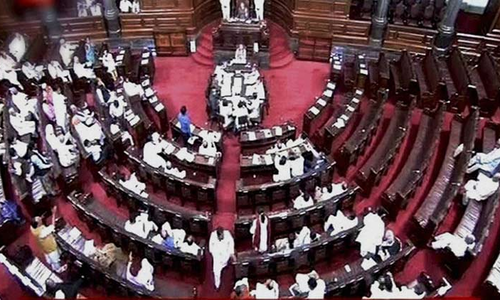 The BJP may have gained Bihar and may snatch a Congress Rajya Sabha seat in Gujarat but the NDA coalition headed by it will still lag behind the opposition in the Rajya Sabha for some time to come.

Interest is centred around the seat held by Congress President Sonia Gandhi’a political secretary Ahmed Patel, which the Bharatiya Janata Party is trying to snatch.

Six Congress MLAs have already ditched the party and one of them, Balwantsinh Rajput, has been pitted against Patel in the August 8 election. In case more MLAs defect, Patel’s fate may be sealed, which will give the BJP one more seat in the Upper House.

The BJP has already grabbed one seat in Goa from the Congress after its Vinay Tendulkar defeated Congress’ Shantaram Naik in the Rajya Sabha poll.

Since the 2014 victory in the Lok Sabha polls, the BJP has a Prime Minister whose party has a majority on its own in the Lok Sabha for the first time in 30 years, a President of its choice and possibly may also get a Vice President it picked.

But to have a majority in the Rajya Sabha, the party may have to wait for the next round of elections for the Upper House.

On the opposition side, the Congress has 57 on its own. The others opposed to the government are 66 in number. Together the opposition accounts for 123 members.

To this figure could be added at least one JD-U MP M.P. Veerendra Kumar, who has opposed the tie up between the BJP and his party in Bihar. He has announced he will vote for the Opposition candidate Gopalkrishna Gandhi in the August 5 Vice Presidential election.

Of the other nine JD-U MPs, speculation is rife about how senior leader Sharad Yadav and another MP, Ali Anwar, will vote. Like Veerendra Kumar, Anwar has also opposed the tie up in Bihar.

Those not committed to either side account for 13. They include BJD (8), TRS (3), INLD (1) and YSR (1). These parties voted with the ruling combine in the President’s election. The BJD, has however, decided to back Gandhi for the Vice President’s post.

There are six independents, most of whom side with the government.

There are two vacancies in the Upper House including the one left vacant by the resignation of BSP chief Mayawati.

The BJP benches will be strengthened by the presence of party chief Amit Shah, who is sure to get elected from Gujarat along central minister Smriti Irani.

The BJP is also set to win a seat in Madhya Pradesh in the vacancy caused by the death of union minister Anil Madhav Dave. It has fielded tribal leader Sampatiya Uike as its candidate.

The Vice President’s election on August 5 will be a litmus test for the JD-U rebels on how they vote. It also remains to be seen whether the JD-U as a whole will vote for Gandhi, as it had announced before embracing the BJP in Bihar.

Now that the JD-U is a BJP ally, analysts are wondering which way it will go in the Gandhi-Naidu battle.

In West Bengal, where elections to six seats are being held, the Trinamool Congress is set to secure five and the remaining one is sure to go to the Congress. The loser will be the CPI-M whose strength will come down in the Rajya Sabha from 8 to 7.