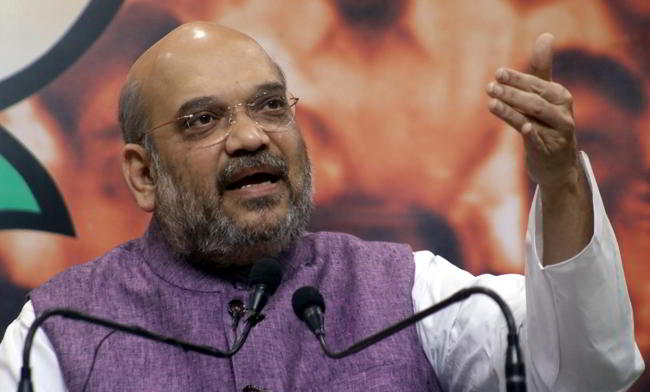 Bharatiya Janata Party (BJP) President Amit Shah on Monday said the upcoming assembly elections in Uttar Pradesh “would not be a referendum on demonetisation policy, but if the opposition wanted to play it that way, then the BJP was game for it”.

“There are so many anti-incumbency issues in UP. Still, if the opposition wants to do a referendum on demonetisation, we are ready for it. People of UP are with BJP on the issue of demonetisation,” Shah said in an interview to CNN-Network 18 Group and claimed his party would come to power in the state with a two-thirds majority.

He also accused the ruling Samajwadi Party and Chief Minister Akhilesh Yadav of playing up their family feud so as “to brush under the carpet the serious issues of law and order collapse and rampant corruption”.

Amit Shah also played down recent comments made by RSS spokesperson Manohan Vaidya on reservations, saying the remarks were taken out of context. “Both BJP and RSS have made it amply clear that in the prevailing situation the current system of reservation must continue. There is no question of revisiting the issue,” he said.

Vaidya was answering a query on reservation based on religion, which BJP is also against, he said.

Asked why the Ram Temple issue suddenly cropped up in the BJP poll manifesto even when the party has clarified it is fighting the polls on developmental issues, Amit Shah said BJP was very clear about building the Ram temple.

The BJP chief took strong exception to allegations that his party was practicing the politics of polarisation.

“There is a lot of anger in UP. If a leader questions the politics of appeasement and casteism being practiced in UP, you can’t call that polarisation,” he said.

He made it clear that BJP campaign in UP will veer around the “collapse” of law and order under the Akhilesh Yadav government, and issues like women’s security and increasing migration.

He also stressed that his party will win Uttarakhand easily, while in Punjab, it was a triangular fight.

About triple talaq, Shah said his party was of the firm view that it is “an assault on the constitutionally guaranteed rights of Muslim women”.