National Democratic Alliance (NDA) government about to complete four years in power and preparations are underway for the grand celebrations. The BJP led government will be eyeing May 26 as an opportunity to set the tone for the next year 2019 Lok Sabha polls. Sources in the BJP told News18 that the tagline for the […] 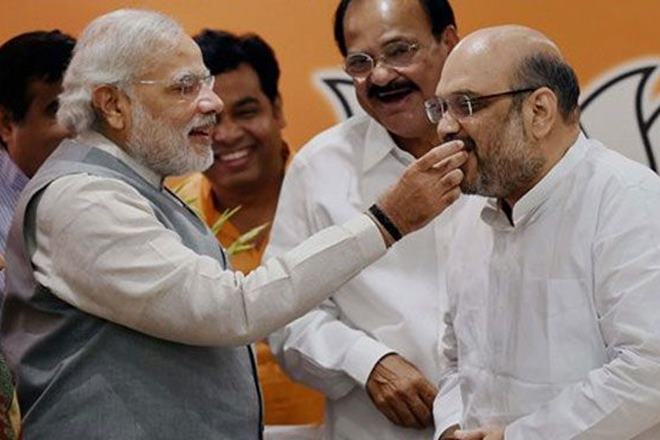 National Democratic Alliance (NDA) government about to complete four years in power and preparations are underway for the grand celebrations. The BJP led government will be eyeing May 26 as an opportunity to set the tone for the next year 2019 Lok Sabha polls.

Sources in the BJP told News18 that the tagline for the fourth anniversary will be ’48 months vs 48 years’ where Prime Minister Narendra Modi will be pitching the achievements of the ruling party in the last 48 months as against ‘48-year rule by the Gandhi family’.

Narendra Modi had taken over as the Prime Minister of India on May 26, 2014.

Multiple officials in the ministries of Commerce and Ministry of Petroleum and Natural gas confirmed that the focus of the government will be on employment. Prime Minister’s Office (PMO) has asked the ministries to figure out how many jobs were created in the last four years of his rule. “We have been asked to come up with a detailed report on the projects and programmes launched and calculate the number of jobs they helped generate,” said a highly placed official in the ministry of power.

The government’s agenda will also highlight the achievements in the past four years about its ‘no-corruption’ track record. It will attack large-scale corruption mushrooming during the UPA rule.

Additionally, the government will also bring to public notice 100% rural electricity. Highways ministry’s achievement to push road construction to 28 km a day and free gas connection to below poverty line, women under Pradhan Mantri Ujjawala Yojana, among others will be the major highlights of the anniversary report card.

Each ministry has also been asked to prepare video clips of major highlights and carry out publicity campaigns. All ministers in the Modi cabinet will be touring across India, holding press conferences to propagate on the Centre’s achievements.

The Modi government’s achievements will be compiled in the form of a booklet for wide circulation. N.K.Sinha, Secretary, Ministry of Information and Broadcast has written to ministries asking them to collect details on their achievements in the past four years.

The information is expected to be used by the Press Information Bureau (PIB), the government’s publicity arm, for wider circulation.

A committee of four ministers has been formed to steer preparations and ensure grand execution of the event. Headed by Railway Minister Piyush Goyal, other members include Minister for Petroleum and Skill Development Dharmendra Pradhan, Information and Broadcasting Minister Smriti Irani and Rural Development Minister Narendra Singh Tomar.

“One family either directly or indirectly ruled the country for 48 years,” Prime Minister Narendra Modi had said in February while referring to the governments of Jawaharlal Nehru, Indira Gandhi and Rajiv Gandhi.

The opposition Congress has been regularly attacking the Centre on employment crisis, quashing the Prime Minister’s electoral claim of providing two crore people every year.

According to senior leaders in the BJP, the government in the last four years has provided close to 10 crore jobs.

Surjit Bhalla, member of the economic advisory committee of the Prime Minister, claimed that around 1.5 crore people got employed in the past calendar year and that the government has been able to maintain a good record on this front. However, managing director of the Centre For Monitoring Indian Economy (CMIE),

However, Mahesh Vyas has opposed this data. He claims that Bhalla has used the CMIE data and made his own interpretations. Vyas claims that the total employment is not more than 15 lakh.

Additionally, the May 26 show will also keep by-elections on the Kairana Lok Sabha seat in mind.

Other topics likely to discussed in the report card include status of Section 370 in Jammu and Kashmir, smart cities and their development, Namami Gange which deals with cleaning of the river, employment generation, FDI attracted under the NDA government, reduction in black money and the status of non-performing assets in public sector banks.