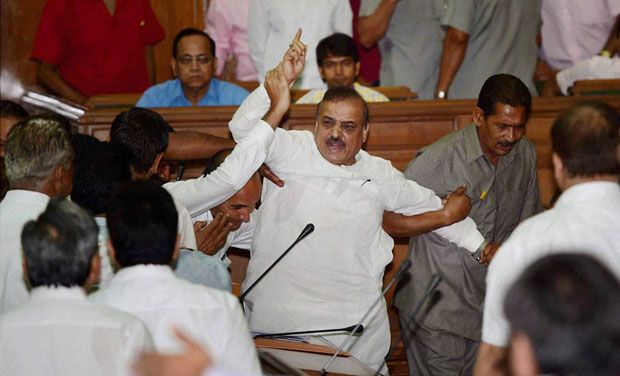 All fivemembers of BJP in theTelangana legislative assembly were suspended on Friday from the house for two days for disrupting the proceedings.

Speaker Madhusudhana Chary announced the suspension of Bharatiya Janata Party (BJP) members, including their leader K. Laxman, as they trooped in the well of the house to protest the Telangana Rashtra Samithi (TRS) government’s move to increase the reservation for Muslims in the state.

Legislative Affairs Minister Harish Rao moved the resolution for the suspension of the  BJP members for this week.

Wearing black scarves and raising slogans against the government, the BJP members demanded that the government drop the proposal to increase the quota for the Muslims.

The TRS government has announced that it will move a bill in the assembly during the ongoing Budget session to raise the quota for the Muslims in jobs and education from the current four per cent to 12 per cent.

Terming the move as “unconstitutional”, the  BJP  has called for ‘chalo assembly’ (March to Assembly) on Friday. Security has been tightened on all roads leading to the assembly building to foil any march by the protestors.

Opposing the suspension of the  BJP  members, the main opposition Congress party staged a walkout from the assembly.