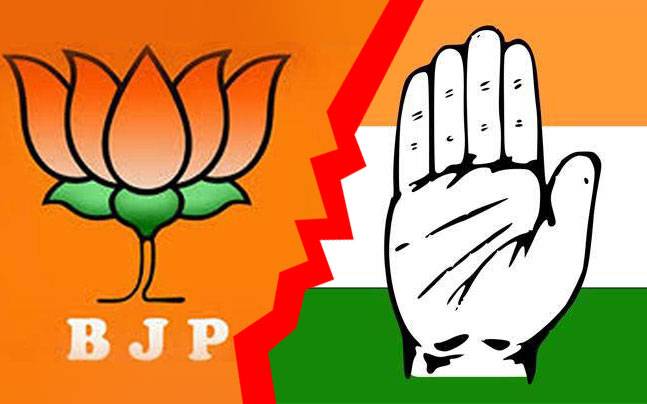 In a stunning reversal of exit poll predictions, Gujarat’s ruling BJP and the main opposition Congress were on Monday locked in a neck and neck fight for power as officials counted millions of votes in the just ended Assembly elections.

Trailing initially after the vote count began at 8 a.m., Congress candidates slowly inched ahead of the Bharatiya Janata Party, trends from the counting centres showed.

The BJP was ahead in 78 seats and the Congress in 88, Election Commission officials said. The Gujarat Assembly has 182 seats.

In a surprising development, Chief Minister Vijay Rupani (Rajkot West) and Deputy Chief Minister Nitin Patel (Mehsana) were trailing to their Congress opponents in morning but now both of them are leading with good margin of votes.

Overjoyed Congress activists began celebrating in Ahmedabad and Gandhinagar. All exit polls had predicted a BJP win in Gujarat, with some giving the party a sweeping majority.

Both the BJP and the Congress claimed they were confident of winning in Gujarat.

Congress spokesperson Shobha Oza said: “People have got sick and tired of the 22 years of BJP misrule in Gujarat. The Gujarat model which the BJP touted so proudly to take power nationally is not clicking in Gujarat… We are confident we will form the government.”

It was the first Assembly election in Gujarat since Narendra Modi became the Prime Minister in 2014. Modi had led the BJP to victory in the election in 2012.