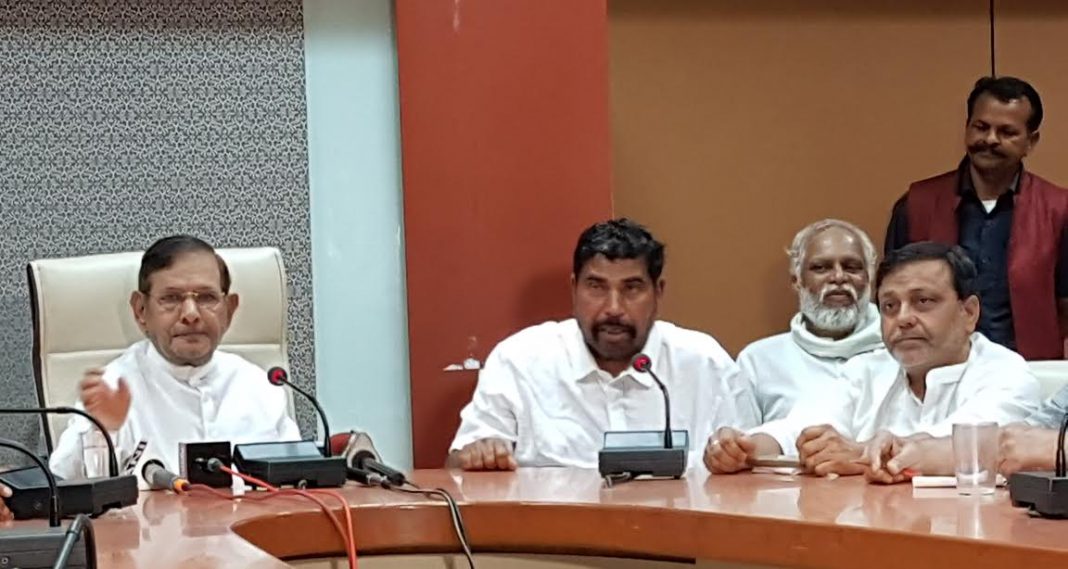 Senior leader of JD(U) and Rajya Sabha MP Sharad Yadav during his visit to Gujarat clears their agenda in the upcoming elections in Gujarat. The party formed alliance with NCP in Gujarat and fight the elections. Yadav said that the main agendas in Gujarat are Bhil reservation and employment issues which they will concentrate.

Sharad Yadav the senior leader is on a visit to Vadodara and talks about the alliance and the performance of the present central government which he claimed failed to keep its promises. He said before the elections the government make many promises but after three years they failed to implement them.

“The present government in Delhi during 2014 elections made promises to give 2 crore employment in a year but the situation after three years is still the same. There is still the contract base system is in place even in the parliament which they till dare not abolish. Second promise they make to give one and half percent more to the farmers for their crops but the situation is still not improving. In my view both the big promises are still as it is and even move backwards,” said Yadav. Yadav raised points like Love Jihad, Ghar Wapsi and Romeo Squad which are the non issues the government is indulged into. “The love Jihad, Ghar Wapsi are the things where they said people to come back. They said Hindus to be one but we are still living in the caste system and until it is abolished the thing is not possible. Secondly the forming of Romeo Squad like thing is to attack the natural relations between the two persons. In all these are all non issues which the government is troubling the people unnecessarily,” said Yadav.

Attacking on the government he said that they promise to clean Ganga and other rivers but see what they do. He targeted the government on the issue of Kashmir and said that why not the government talked to them. “In the last 70 years or so many sacrifice their lives for Kashmir and the state is the perfect example of unity in diversity. However the present government pushed the state to vulnerable state. The government should go for talks as they do many times to solve the situation in the valley. Whenever religion and politics go together then the result is Syria, Iraq,” said Yadav.

On Gujarat he said they will work for the issue of Bhil reservation and employment issue like to abolish the contract labour system in the state for the upcoming elections. About the alliance with NCP he said they will make the party strong and main focus is on unity of all to solve the situations at centre which they did earlier on many occasions. About his prediction of to be the next President of the country he said the people will decide on the final call.