Connect Gujarat
#Beyond Just News
More
Home Gujarat Barodians arrived in big numbers at airport to pay tributes to the... 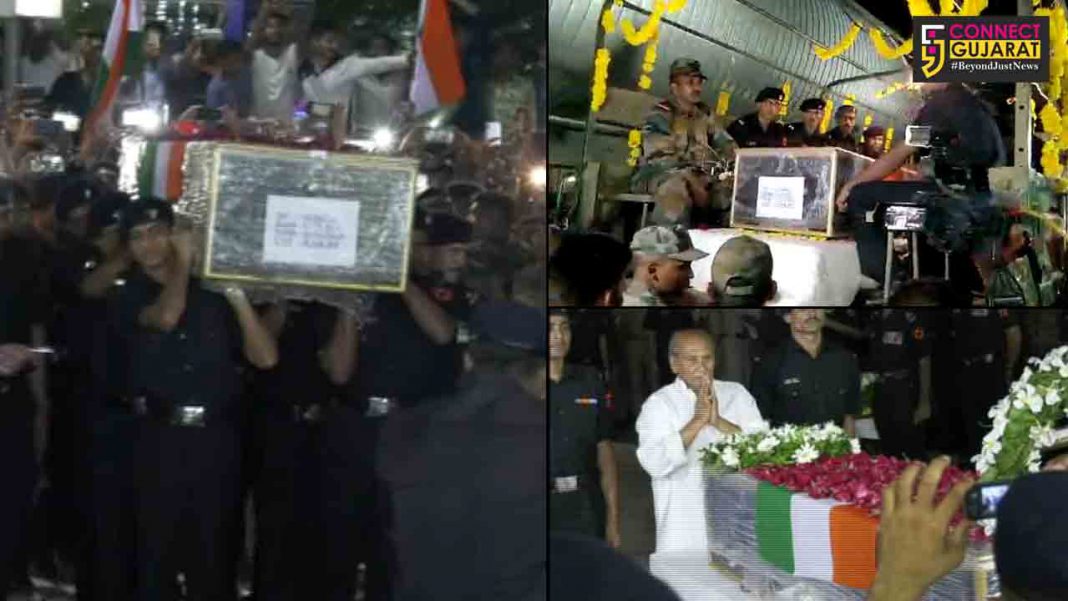 Will be laid to rest on Wednesday

Barodians arrived in big numbers at the airport to pay tributes to the martyr Rifleman Mohmmad Arif Pathan whose mortal remains  arrive at Baroda Airport in a Indigo flight. Officers from the army, soldiers, police, MP Ranjan Bhatt, senior BJP leaders and others present at the airport and paid respects to the martyr soldier in the Wreath laying scheduled at the airport.

The Mortal remains of braveheart Rifleman Mohmmad Arif Shafi Alam Khan Pathan arrives at Baroda Airport by Indigo flight 6E 2698 from Delhi. The wreath laying ceremony was arranged at the airport by the Army Station Commander Baroda where everyone paid their respect to the martyr jawan.

This ceremony was under arrangement of Army Station Commander  Baroda. Arif was martyred on Monday to unprovoked ceasefire violation on the line of control (LoC). Indian troops responded strongly and inflicted heavy damage to Pakistan Army posts and casualties to Pakistan soldiers.

Rifleman Mohammad Arif Shafi Alam Khan Pathan was critically injured and was air evacuated to Army Hospital, where he succumbed to the injuries. He is survived by his parents, father Shafialam Khan Pathan and mother Habiban Banu.

On Tuesday morning his regiment paid tribute to the brave soldier and Jammu and Kashmir. His mortal remains arrived in Vadodara later in the night where a guard of honour and wreath laying ceremony held at the airport. He will be laid to rest on Wednesday with full honours after the afternoon Namaaz.