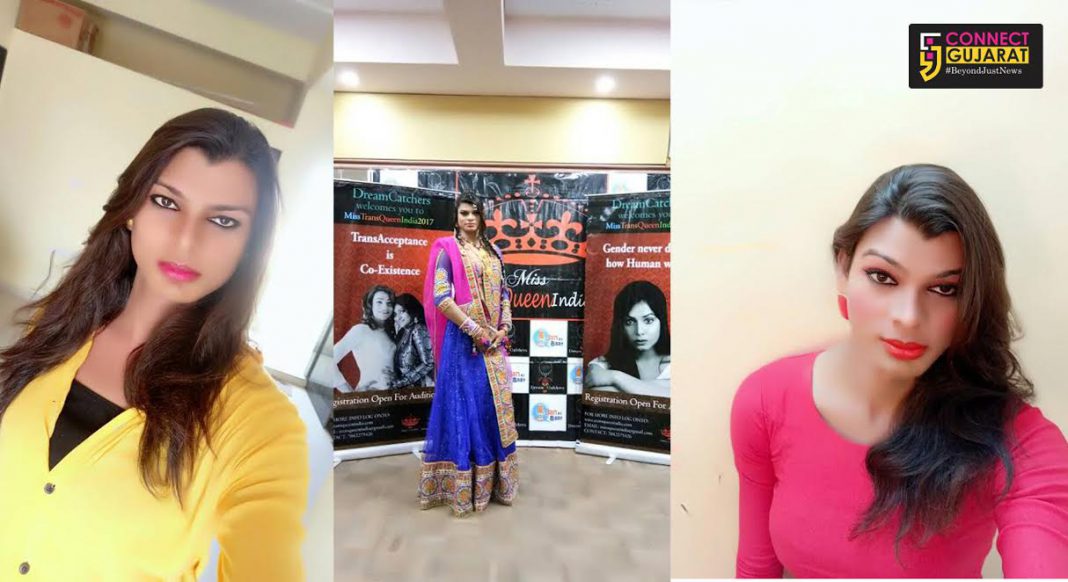 Coming August India will witness its first Ms. TRANSQUEEN INDIA 2017, first ever India Trans Women Beauty Peagent to be held in Delhi. About 30 participants will fight it out for the crown and represent India in the Miss International Transqueen at Thailand. From Gujarat Aayesha Shaikh from Vadodara is the only contestant to participant in the national peagent and wants to win the International title.

Aayesha a trans female is 20% away from being turning into full woman and really exciting with her new identity. She gave the auditions in Mumbai and from there selected for the National peagent and eager to win it.

“From a very young age I m aware about my feminine status and my friends teased me during school and college days. When finally I revealed the truth to my family they oppose it and since then I take it as a challenge to prove myself. The Transqueen India 2017 comes as a blessing in disguise to me and now I want to win the national round and then going to represent my country in the International level,” said Shaikh.

Aayesha is working as a project director in Wajood under Lakshaya Trust working for the Transgender community in Vadodara. She did Diploma in Service Industry and also worked for a International airlines but her feminine thing always came against her. She then decided to left everything and join the project and working for her own community.

“The only aim to take part in the Trasqueen India 2017 is to show my talent in front of the world and gives a message to the others that Transgender people can also have the same talent like others. I want to win the national and then represent my country at the International peagent to be held in Thailand,” said Shaikh.

Aayesha said that there is less awareness about the Transgenders in India and people are not coming out in open to reveal their identity. Furthermore they also indulge in wrong activities like prostitution which she wants to stop. “Like myself there are many women who don’t come out in open with their identity and hide themselves due to social stigma. Later they indulged in wrong activities like prostitution which spoils their lives. With the help of this contest I want to show them that we people are also normal like everyone and having hidden talents inside us. I want to tell them that they also came out in open and show their talents rather than involved in bad practices,” said Shaikh.

Aayesha said that she was shocked after her parents and family oppose her decision when she revealed her identity to them. But she is hopeful that the contest is a great platform for her to prove herself and then her family might accept her. Unlike others she also wants to start a family in future.

“With my trans female status I visit to fashion shows and lots of offers are pouring in from serials and films. But I am concentrating on the beauty peagent as well as the surgery which can turn me fully into female. The International contest can give me 5 lakhs and the sex change operation for free. So the aim is to win it and use the money for the welfare of my community. Secondly unlike every women I also has dreams of starting family and waiting for a suitable partner who understands me,” said Shaikh.

The idea behind this event was not only to give platform to transgender women for showcasing their talent and beauty but also to create larger advocacy around trans-issues and appreciate and recognise the support of the people.HIV India Aids Alliance has also been tremendous with their support.

Transgender beauty pageants have been a very common phenomenon outside India. And have been recognised widely by the community. But it is here that the organisers need to bring them out of the closet. It all began when Reena Rai (Founder & Chairman) along with her close friend Sushant Divgikar happened to attend a transgender event called hijra habba. It was there that the enormous amount of talent and beauty that these people possess stuck her. And she decided to extend her support to the cause.We are fortunate enough to have onboard Ms. Abheena Aher-leading transactivist for almost 2 decades, Chairman of the Asia Pacific Transgender Network as co orgraniser.

The organisers motto is to Cover10 states and involving more than 1,500 transwomen across India,leading it to participation in international platforms making it a globally acclaimed event. The Main draw for this event is that the winner represents India in the most prestigious award for the community: Miss International TransQueen at Thailand.

The Audition in Delhi lifted the spirits of Suhani DreamCatchers. Beautiful transgender women turned up in good numbers and appreciated them whole heartedly for taking up this cause. For participants, this beauty pageant is more about their true worth and dignity as human beings. They motivated the team with their ambitious attitude towards life and amazing positivity.

The organisers also had a huge success in the Manipur auditions which results in selection of such talented semi finals, infact the Mumbai audition were a big hit which held  on 19th may at Shariq hall in Andheri in which Transqueen India 2017 got a chance to associate with esteem panel of judges like AHER ABHINA, HARISH IYER,YUVRAAJ PARASHAR, ANJALI LAMA.