Baroda artists show in exhibition Chai and the City that opened in Derby, UK 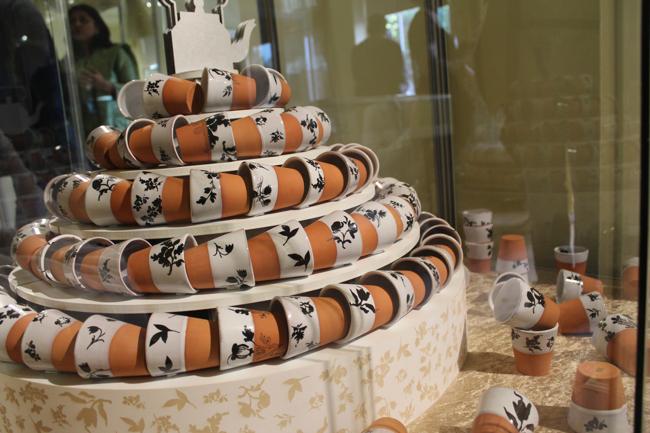 12 Indian artists (8 from Vadodara) are participating in an exhibition, Chai and the City, that opened at Pickford’s House Museum in Derby city in the UK on Friday, September 29. Organised by Zahir and Ruchita Shaikh of Artcore, the show, curated by Vadodara-based arts writer, Sandhya Bordewekar, dovetails into Britain’s celebration of 70th anniversary of India’s Independence this year. It comprises two exhibitions linked together organically, showcasing artworks made by 16 artists from UK and India, on themes that closely link the two countries.

While the Chai part of the exhibition focuses on the popular culture and history of drinking tea/chai in both countries, but in completely different ways, the City part of the show celebrates the rich heritage of Indo-Saracenic architecture in India, specifically of Baroda city, designed by British architects, with an evocative exhibition of photographs by Vadodara-based photographer, Rahul Gajjar.

“Chai” is the popular name for Indian tea, a strong, milky, sweet, boiled beverage often spiced with grated fresh ginger root, sometimes with tulsi and mint leaves and almost always with the ubiquitous chai masala powder, easily available at roadside tea-stalls that dot the urban Indian landscape. The Exhibition examines how artists, in the present day, look at tea and its associations, the narratives built around it, its harvesting, global commerce, and so on. Works of 16 artists (5 from the East Midlands, 11 from India) offers a comprehensive exploration of the subject.

The “City” exhibition celebrates the Indo-Saracenic Revival, an architectural style movement by British architects in the late 19th-early 20th century in British India. It drew elements from native Indo-Islamic and Indian architecture, and combined it with the Gothic revival and Neo-Classical styles favoured in Victorian Britain. Such buildings were often rendered on an intentionally grand scale, reflecting and promoting a notion of an unassailable and invincible British Empire, as well as of the Indian royalty who often commissioned these architects for their own palaces and public buildings. Chief proponents of this style of architecture in India were Robert Fellowes Chisholm, Charles Mant, A H Coyle, Henry Irwin, Sir William Emerson, George Wittet and Frederick and Charles Stevens, along with numerous other skilled professionals and artisans throughout Europe and the Americas. Of these, Chisholm and Mant created several public buildings and palaces in Baroda, though architects such as Coyle, Emerson and Charles Stevens also built in Baroda.

These architects designed major and minor palaces, University/college buildings, hospitals, museums, libraries, markets, government office buildings, clock towers. Together, these constitute the architectural ‘face’ of Baroda city, and constitute one of the best examples of Indo-Saracenic buildings in India.

Rahul Gajjar’s photographs capture the grandeur of the architecture and the fine understanding that the English architect brought to selection of materials and design which corresponded to Indian weather conditions that were totally contrary to that of Britain. The exhibition is also a sensitive documentation of the British legacy in India that precariously survives the ravages of the elements and the tumultuous nature of socio-economic changes that can often be disastrous to the survival of built heritage.

Pickford’s House Museum in Derby is part of the Derby Museum and is an ideal location for this show. Joseph Pickford (1734-1782) was himself an architect and builder who built most of the houses in mid-17th century Derbyshire, which was the crucible for the Industrial Revolution that started in England and led to rapid urbanization – the development of towns and cities. The Pickford’s House is conserved as a heritage property and an example of urban life in Georgian England. Most of the rooms are re-created to stress this aspect, while there are about 5-6 rooms available to host curated and travelling shows that generally reflect the theme of the Museum.

For the Chai and the City show, this was the most appropriate and ideal venue. The Museum also dipped into its own significant reserve collection of tea-pots, metal tea boxes, designs on tea services (kettles, teacups and saucers, sugar and milk pots, tea-cake plates) that were created and used by ceramic industries, and advertisements for tea, that it also displayed as adjunct to this exhibition. Chai and the City will continue at the Pickford’s House Museum till November 18, 2017.