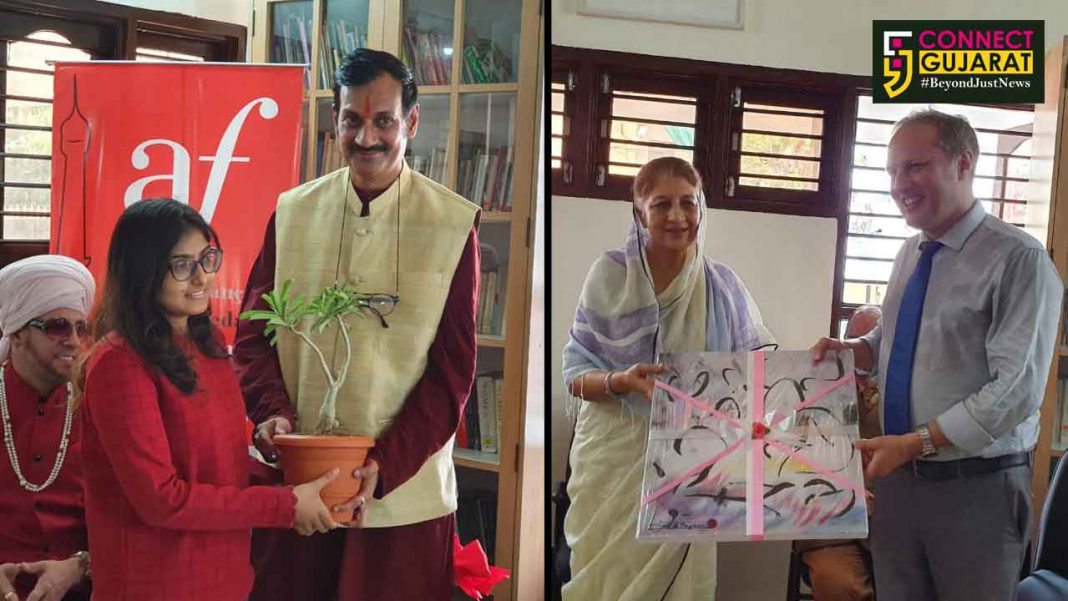 Work extensively for cultural exchange between both countries

The Baroda branch of Alliance Françaised’ Ahmedabad started in Baroda shifted to new office and looking forward to work extensively for cultural exchange programmes between the two countries. The French government is also looking forward to target the youth of India and also forward a proposal to MSU Chancellor to start a course in the university.

“India is among the top five associations of AF in the world and we are working as a bridge between the two cultures. We are focusing on many fields and specially on the youth to engage them in development of both the countries. Higher education, research, innovation, aerospace, agriculture, climate change, smart city project, architecture, heritage, tourism, mathematics, marine sciences are some of the fields we are looking to tap in for the youths. Through cultural exchange programmes we are putting place the policy of residencies in France about 10 to 15 who can stay there and work for the culture exchange,” said Dr. Bertrand de Hartingh.

He also said about association with MSU Baroda for starting a programme in the university for the students wish to visit France for higher studies, research and careers. “They gave a proposal to us and it can be beneficial for the students to learn the language, in depth idea about the culture and country, further studies in different subjects, higher studies after post graduation and also professors can visit there for the exchange programme. We will definitely consider it,” said Chancellor Rajmata Shubhangini Raje Gaekwad.

The French Counsellor, the Director, the President and all the honorary guests discussed about how the could be considered a milestone for the city in creating opportunities for people to explore the french language, how it also expands new horizons for the students who wish to pursue their further studies in France via its partnership with Campus France. How, being an institute which is cultivated internationally, it will, over the short period of time, also become the cultural hub in the city, welcoming artists, painters, musicians, dancers from France as well as from India to showcase their art.

Alliance Française is an international institute that aims to promote French language and culture across the globe. AF was first created in Paris on 21 July 1883 by a group consisting of a scientist Louis Pasteur, the diplomat Ferdinand, the writers Jules Verne, Ernest Renan and the publisher Armand Colin. Today, over the century, there exists around 850 centres in 137 countries, of which, Ahmedabad became a part in 1981, almost a century later.