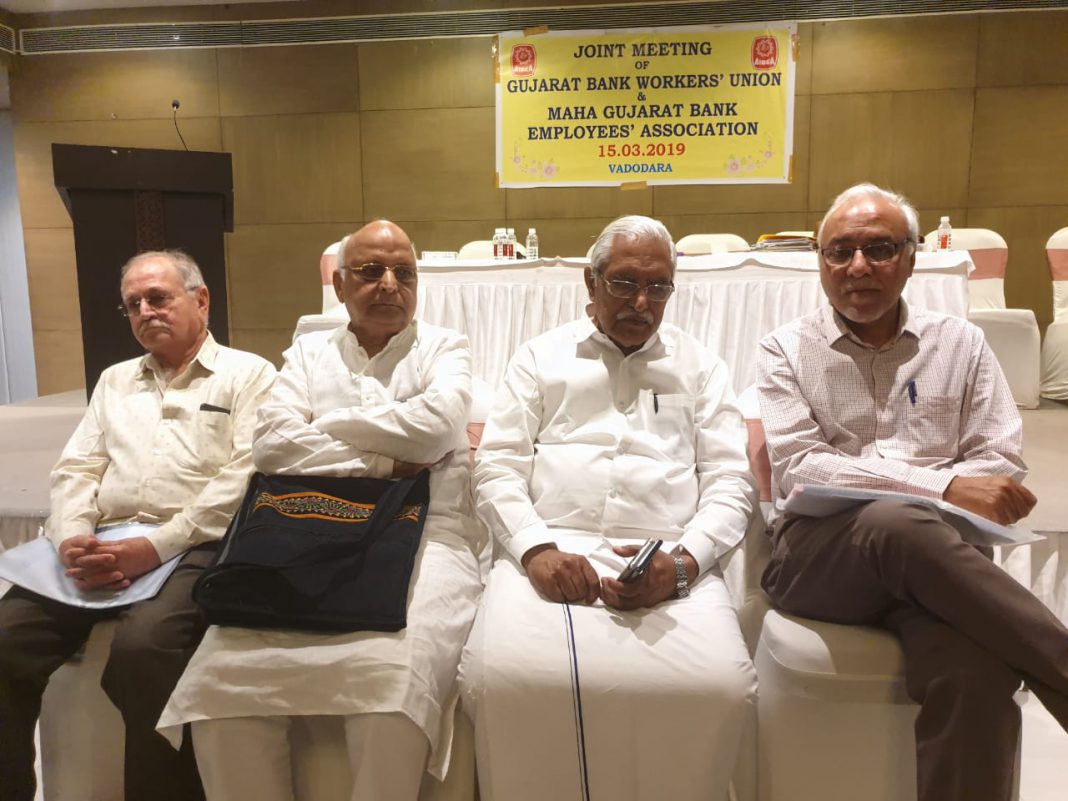 Said they are against the merger of BOB, Dena bank and Vijaya Bank

Bank union decide to approach the political parties with a common charter of their demands in the upcoming elections who can think about supporting workers. They are also against the merger of three banks as the decision is not good for anyone. They demand extension of public sector banks rather than pushing them to privatisation.

A joint meeting of Gujarat Bank Workers Union and Maha Gujarat Bank Employees Association in Vadodara held at Vadodara where a brainstorming session was there to decide on various points. All India Bank Employees Association (AIBEA) President Rajan Nagar and General Secretary C.H. Venkatachalam attend the meeting and discuss on the merger, present political scenario and employees welfare.

As three banks Bank of Baroda, Dena Bank and Vijaya Bank is going for merger on 1st April the AIBEA is not supporting the decision on larger interest of the employees and people. “We are against the decision of merger as it not in the interest of nation. The example of SBI merger with associate banks is in front of us where thousands of branches were forced to close. This time also the fate will be same and Gujarat will suffer a lot with the merger of three banks. The service will decrease after the merger, recruitment will be less and the employees worried about the job security,” said Rajan Nagar.

They said loans are increasing day by day and demand to recover bad loans. “We strongly recommend to recover bad loans and the recovery can be bring under criminal law. The names of the defaulters should be make public as they also has the right to know the status of their money. The election commission also disqualify the candidate if found to be a bank defaulter,” said Vankatachalam.

All demand to save public sector banks and request the government to strengthen them by loan recovery and capital. With the slogan Bank Badhao Desh Bachao they demand opening of  more branches. They also will going to represent before the parties with their demands and select those who thinks about labour welfare. They also threaten to go on strike for their demands in coming days.