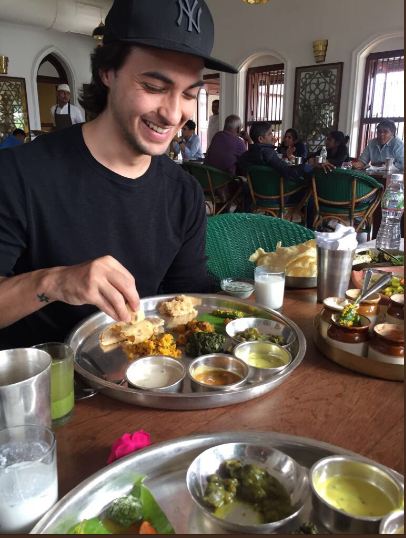 Ayush Sharma is ready to enter Bollywood with his film Loveratri make under Salman Khan Films. To mould in the character of the film the actor reach Gujarat and try to know the local cultural here.

The storyline of the film Loveratri is based on Gujarat where Ayush plays the character of a Gujju boy. It’s a love story which comes to light in Gujarat.

To get into the character Ayush Sharma joined Abhiraj and Niren Bhatt in their reiki of Ahmedabad city. He also taste the typical Gujarati Thali in the city includes Rayta, Sheera, Dal, Gujarati Kadhi, Khaman and various other delicacies.

The upcoming actor took to social media and write about his wonderful experience at the House of MG in Ahmedabad and the fun he is having with the reiki of Loveratri.

The story of the film is written by Niren Bhatt a famous Gujarati writer lives outside Mumbai and born in Bhavnagar. Ayush is making every minute count during the reiki of the city to understand his character more deeply.

Abhiraj Minawala makes his directorial debut with this film along with the actor Ayush Sharma. The actress is yet to be decided for the film. The film is make under the banner of Salman Khan Films produced by Salman Khan.