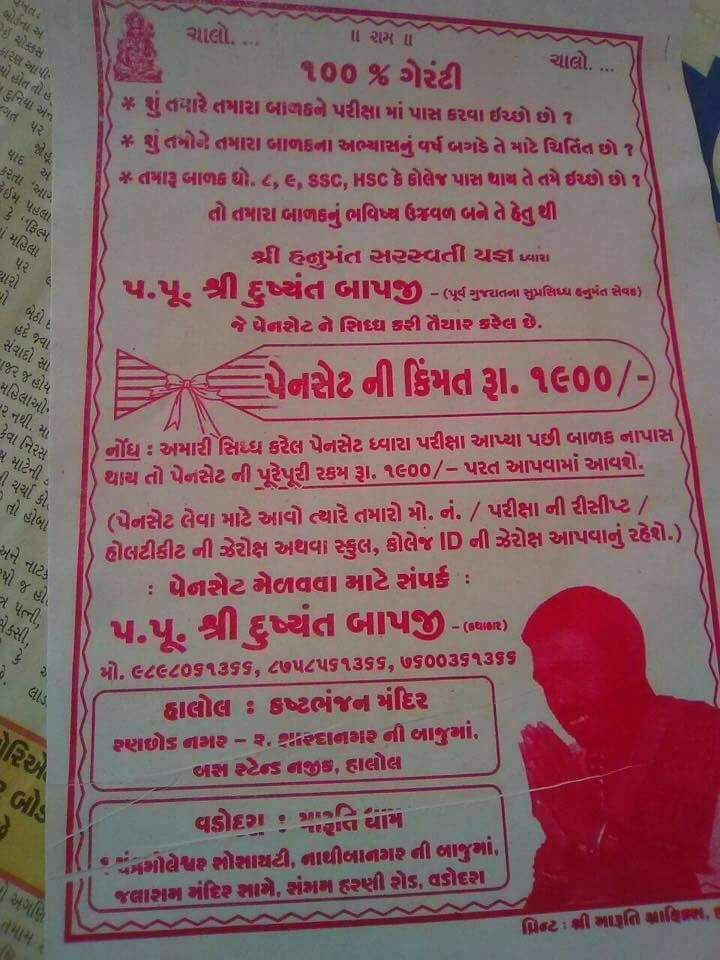 As the board students are preparing for their exams starting from 15th April, the astrologer are also getting active during the time to run their machinery. Such a said astrologer in Vadodara runs his business by selling magical pens to board students with a gurantee for their success in exams. The astrologer even offers money back guarantee to the people who purchase pens from him.

The astrologer with the name of Dushyant Bapji published pamphlets before the exams and distribute in Vadodara and Halol cities. He mentioned the magical pen in the pamphlets with a gurantee of success and also money back guarantee to the people. The pen costs at 1900 per set and available in two places Halol and Vadodara.

A complaint was filed about the said astrologer from Halol to the education ministry and from there the notification was send to the District Education Officer to conduct a inquiry into the matter. After the notification the Vadodara DEO M.L. Ratnu send his team to the said places but no one is found there by the team. Even the house of the astrologer in Sangam area of Vadodara city is also locked.

“There is a complaint given to the education minister and from there they directed us to conduct inquiry into the matter. All the numbers given in the pamphlets are switched off and we found no one at both the places mentioned in the pamphlet. I send my office staff pretending as parents to him to collect the evidence but no one was there and the house is also locked. Its a clear case of cheating and playing with the emotions of students and parents. We are in search of him and so as the police,” said Ratnu.