Around 77 percent of the electorate in 39 Assembly constituencies in Assam turned out to vote on Thursday, which was the second phase of the three-phased election. Polling was conducted peacefully even though there were reports of EVM glitches from some polling stations, sources reported. The report quoted an EC official as saying that the […] 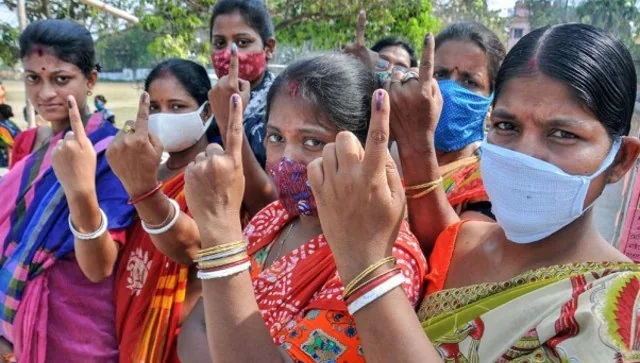 Around 77 percent of the electorate in 39 Assembly constituencies in Assam turned out to vote on Thursday, which was the second phase of the three-phased election. Polling was conducted peacefully even though there were reports of EVM glitches from some polling stations, sources reported.

The report quoted an EC official as saying that the malfunctioning EVMs were “immediately” replaced so “voting continued uninterrupted”.

Long queues were seen outside most of the 10,592 polling stations across the 13 districts in the Barak Valley, the Hill region and parts of Central and Lower Assam since early morning. As of 9 pm, the overall polling percentage was estimated to be 76.96 percent, according to the Election Commission’s Voter Turnout app.

A significant number of women voters were seen turning up early to cast their vote. At most places, voters were found wearing masks and maintaining social distance as they stood inside the rings drawn at six feet distance outside the polling stations.

They were also checked with thermal scanners for body temperature, given sanitiser and disposable plastic gloves before they went into the polling booth to cast their vote.

For senior citizens in the Cachar district, an e-rickshaw service was made available to ferry them to the polling booth. Meanwhile, wheelchairs were provided at all the election centres, and resting areas were created for senior citizens to wait for their turn to vote, sources reported.

Voting began at 7 am and ended at 6 pm with the extra hour given in view of the pandemic.

Senior Congress leader Sushmita Dev also cast her vote at a polling booth in Silchar and asserted that her party will win the elections.

On the political front, the Election Commission issued a notice to Assam minister and BJP leader Himanta Biswa Sarma for allegedly making “threatening” remarks against Hagrama Mohilary of the Bodoland People’s Front. Sarma has been asked to respond to the notice by 5 pm on Friday.

While voting was being held in 39 constituencies undergoing polling in the second phase, campaigning continued in the seats voting as part of the third phase. Prime Minister Narendra Modi hit the campaign trail in the state on Thursday, addressing a rally in Assam’s Kokrajhar. Drawing a football analogy, the BJP leader claimed that the people have shown the “red card” to the Congress-led Grand Alliance or Mahajoth in the state.

He also accused the previous Congress governments of being “mute spectators” for decades to unbridled violence in the Bodoland Territorial Region (BTR) of the state.

On the other hand, Congress exuded confidence about their victory after polling in the second phases ended at 6 pm. The party claimed that the Grand Alliance led by it will reach the majority mark of 64 in the 126-member Assam Assembly from the results of the first two phases of the election as the people of the state have responded to its “positive campaign”.