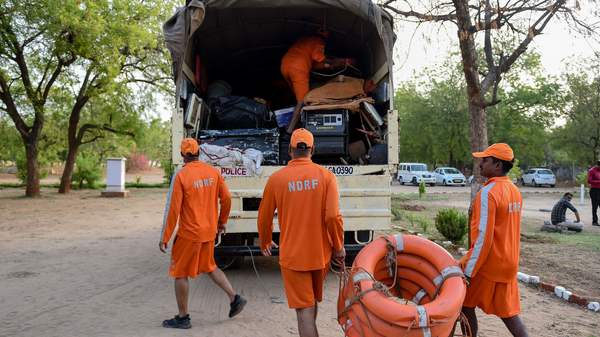 South Western Air Command has proactively enhanced its preparedness to meet any contingencies which may occur due to cyclonic storm ‘Vayu’. Medium Lift Helicopters and Light Utility helicopters have been positioned at nodal points in Gujarat. These helicopters are equipped to undertake disaster relief operations.

Highly mobile deployable Radar has been placed at a high state of readiness at Gandhinagar.  The radar along with its own satellite communication system can be deployed at remote location for channelizing helicopter operations towards relief and evacuation as well as establishing communication with control centers. Mobile communication vehicles have also been positioned at nodal points Communication support groups have also been formulated at air bases in Gujarat to handle potential contingencies.

Similarly Army has been requisitioned by the state government and total of ten columns have been deployed in the coastal areas of Jamnagar, Gir, Dwarka, Porbandar, Jamnagar & Somnath, Morbi, Bhavnagar, Rajkot and Amreli.

Army has allotted 24 columns on standby and is ready to carry out any rescue and relief operations.  Each column has strength of about 70 persons from Infantry/Artillery, Signal, Engineers and Army Medical Corps.

It is a self sustainable rescue team with its inherent medical team and encompasses various engineer stores including inflatable boats to be deployed at various places depending on the location which is directed by the central control room monitoring the flood relief during emergency.  State Emergency Operation Centre (SEOC) has given formal requisition for Army to take over responsibilities for any eventualities.