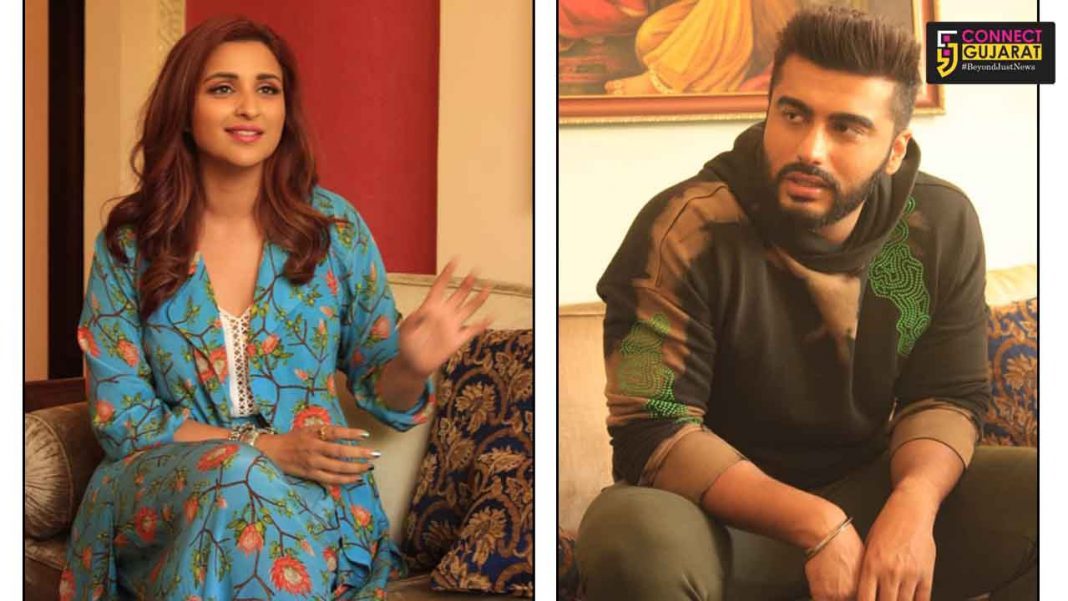 Excited to be here in the best time of Navratri

Arjun Kapoor is excited to restart his Garba from Vadodara as he and Parineeti Chopra visit the cultural capital as part of their film ‘Namaste England’ promotions. On his maiden visit to the city and that too in Navratri gives him the much needed chance to re launch himself into garba. Parineeti Chopra is also looking forward to shake her legs with the players on the ground and enjoy the night with the local players.

After a long time of six years the chemistry between Arjun Kapoor and Parineeti Chopra is once again ready to entertain the audience with Namaste England. The film brings back the much loved pair after their debut film Ishaqzaade. The team Namaste England reached the garba capital to enjoy the festival taking some time out of their busy promotional events.

Arjun Kapoor in particular is excited about re launch himself in playing garba. “For the last 15 years I didn’t get a chance to play garba and now it’s a golden opportunity for me to restart my passion from the garba capital Vadodara. The city is famous for its traditional garba and I am looking forward to start in traditional way,” said Arjun Kapoor during a interaction in Vadodara.

Once again the audience will see the strong chemistry between the two actors. “We always be in touch with each other in these years after our first film and that gives us the comfort level to play the characters of a married couple in this film. We are very good friends and that clicked between us to play the roles,” said Kapoor.

On his dream roles Arjun said his upcoming films fulfil much of his desire. “I want to play a character IB and IPS officer which I play in my upcoming film India’s Most Wanted. Panipat is a periodic film which gives a different shade to my character. In future I want to play a role of action comedy which we often not see in bollywood,” said Kapoor.

On sister Janhvi Kapoor he said we are still understanding each other and support her in such difficult times. He also thanked his sister Anshula Kapoor to allow him to taking care of other two sisters. He wants to be the support system of his father and help them in this difficult time.

Arjun speaks about #MeToo movement openly and said it’s a sensitive time for the industry and handle with care. “We want to listen quietly about all the things coming out and this is not the time to react instantly. First the truth has to be comes out and the issue is such sensitive that it can be handle with care and cleverly. This is not the time to create sensation and the people must aware that No Means No and don’t misuse the power,” said Kapoor reacted strongly on the issue.

Arjun also owns a football team in ISL and his aim is to produce good 11 players from India to compete in the international stage.

On her dream role she said a role like Deepika in Ramleela is something she is looking for in her career. On Hollywood dreams she said right now she is concentrating on her bollywood career.

On #MeToo Parineeti Chopra said she is the biggest supporter of the movement and always stand in support for the one comes out in open. “I am the biggest supporter of the movement and the first one to give reaction on it. I am lucky not to face such situation in the industry but my heart goes out to those who after facing such difficult situations still manage to move forward in life and live strong. I respect such ladies in life and always ready to support them in their fight. I hope the movement bring good change,” said Parineeti.

Finally on social media she said the medium is today’s newspaper as we view different topics at one place. The medium gives a platform to connect with the fans but it is more of a responsibility to use it in a right way.