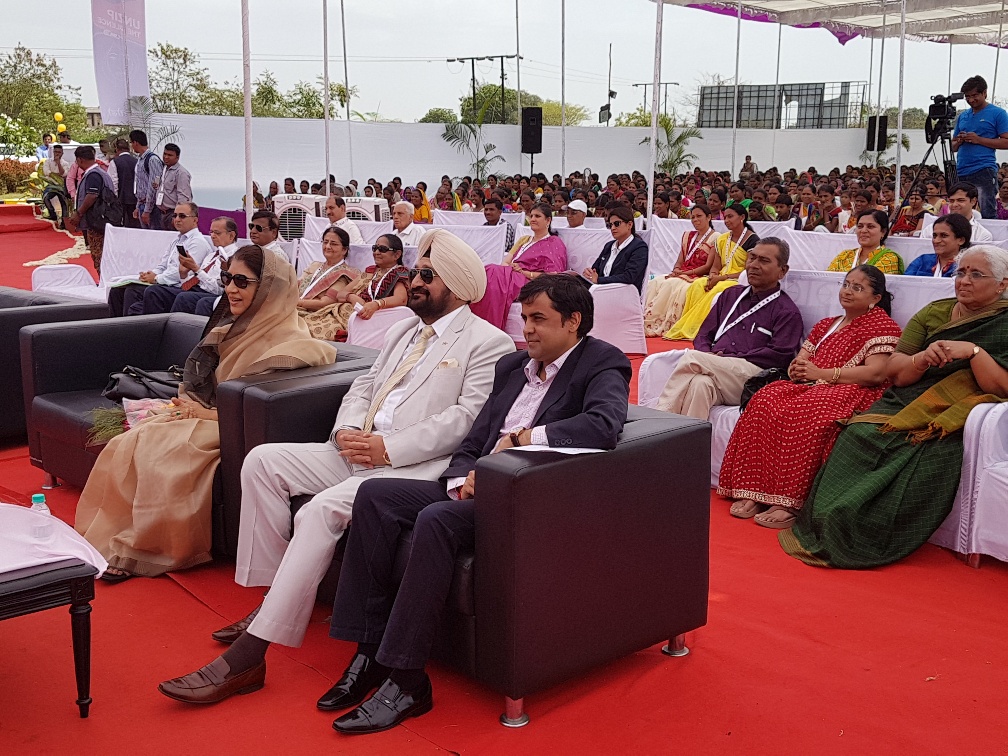 Hemlataben Vankar, Rekhaben, Pushpaben Ramesh are some of the women from village areas in Waghodia who not only make herself self independent but also support their families with good income. The good thing is that they also inspire the other ladies in their village to join them and make them a strong support system of their respective families. To commemorate the lnternational Women‘s Day, Apollo Tyres on Friday felicitated these women achievers of Waghodia Taluka, in Vadodara. These women, after being trained by Apollo Tyres Foundation team, have not only worked for their own empowerment and livelihood generation, they have also aligned with similar women from their own or nearby villages, and have provided income opportunities to them as well by forming self~help groups. Madhubhai B Shrivastava, MLA (Waghodia) awarded the cheques to the other SHG representatives. Also present on the occasion were top officials from other Social Institutions, District and Block level officials and senior management team from Apollo Tyres’ Limda facility. The company, under Apollo Tyres Foundation (ATF), started the livelihood and Income generation project in 2011 around its manufacturing facility in Limda, Waghodia, with the objective of inculcating the habit of small savings amongst women and creating livelihood opportunities for them.

In the past six years, this project has expanded to 16 villages in Waghodia and has reached out to more than 1100 women. in addition to SHG management, the ATF team has provided vocational training to women including apparel making, jewellery designing, nursing, beautician, housekeeping, khakhra making, sanitary napkin making, soap & detergent making, etc. The women have also been trained to deal with social issues like domestic voilence, gender rights and dowry. Hemlataben Vankar, from Alwa Village, comes from a very poor family background. She has 6 members in her family including her children and husband. Five years back, her husband, a daily wage worker was the only earning member of the family with Rs 1500/month as his income.

She had to mortgage her ornaments for children’s school fees and healthcare due to financial difficulties. She joined the self-help groups formed by the ATF Team in her village to promote the habit of savings amongst women. She also received income generation training like tailoring and beautician courses, along with financial literacy.

In the year 2016, with the help of other SHG members, Hemlataben formed a Credit Cooperative Society with 900 ' plus women participants. Through tailoring, she is now able to earn Rs 3000 -5000 on monthly basis, and upto R3 12000 during the festive season.

Rekhaben belongs to Dolapura Village. Her family has 5 members and her husband was the only bread winner for the family. As a daily wage worker, he used to earn Rs 2500 3000 per month, and Rekhaben used to support with agriculture work. The traditional ways of farming was not helping her earn much. She became a member of the SHGs formed by ATP and received trainings on improved farming practices, kitchen gardening, vermicomposting, livestock care and management. ln the year 2015-16, she mobilised the SHG members in her village, and started a dairy in partnership with Baroda Milk Dairy. Initially, there were only 45 women in her dairy, which

When ATF introduced the biogas project,she took the lead and implemented it first. This lead to financial savings, health benefits and better natural resource management for her. Looking at her success 50 other women from her village have adopted the biogas fuel model and are reaping the benefits.

And the third Pushpaben Ramesh from Amodar village, had a family income of Rs 5000 per month, with her husband as the sole earner. She wanted to support her family but as she was only 4th class passed, could not get any job. The ATP team was sent back thrice by her villagers, thinking that they would run avVay with the money of the women. Pushpaben somehow managed to convince them to form the self-help group with the support of ATF.

She received training on the making of khakhra, rakhi and broom, in addition to beautician courses, as a part of the livelihood generation project of ATF, and got exposed to other successful women enterprises running in Gujarat.

Taking inspiration from the women enterprises, Pushpaben‘started her own khakhra production unit in the year, 2015-16 with the support of ATF. She started her work with four women and used to earn Rs 5000 10000 monthly. With the increase in demand, she is now running 3 khakhra production units, and has given employment to 26 women. Her annual income is now around Rs 10 lakhs.