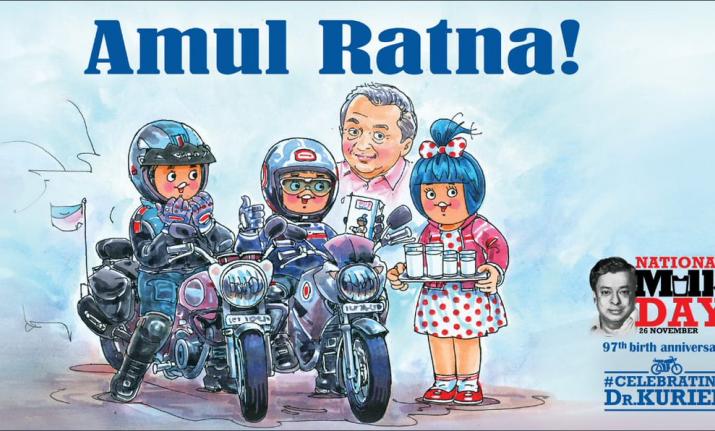 Commemorating the contribution of Dr Verghese Kurien the father of White revolution Amul has dedicated a doodle to him on his 97th birth anniversary. The doodle shows him in the background and the Amul girl the mascot of Amul offers milk to the bikers.

Every year the whole nation celebrates 26 November as National Milk Day giving a tribute to Kurien on his birth anniversary. This year Amul dedicated the lagacy of Dr Kurien with the caption ‘Celebrating the legacy of the Milkman of India!’ with the words ‘Amul Ratna!’ in the caricature.

A rally was also started from Jammu on November 17 and covered various dairy farms and village co operative societies before entering Gujarat.

After completing his education in America, Kurien returned to Anand in Gujarat and worked at the dairy division. Kurien’s Operation Flood launched in 1970 connected 700 towns and cities in India by the National Milk Grid. This programme helped connect milk producers and consumers also helping farmers. He lived in Anand for the rest of his life monitoring and working towards the betterment of the milk revolution.

He passed away at the age of 90 following an illness on September 9, 2012. The mascot of Amul and their tagline ‘Utterly Butterly Delicious’ is one of the most recognised brands in the country. Their doodles on topics of national interest are much loved among people.