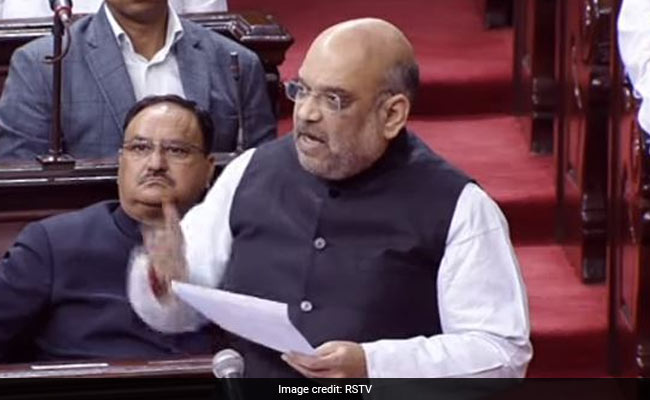 In the Rajya Sabha, BJP President and MP Amit Shah in his first speech, were counted NDA Government's achievement . At the same time, he made several wars on the Congress and answered several allegations on the party. There was a lot of applause at many of his statements, and the Congress was also shocked at many statements. Amit Shah said in protest against Congress MPs that you have to listen to me six years now. Not only that, he also said that you too will be in power tomorrow.

1- Amit Shah said that the biggest economic improvement in the world has happened in the form of GST in India. The Bharatiya Janata Party had never opposed the GST but its methods were opposed. He said that, then the central government did not take care of the relations of the Center and the state. You have not fulfilled the promise. The states did not meet the deficit. The current NDA government has completed this deficit and resolved the states' doubts.

2- Shah said, GST was told as Gabbar Singh tax, Gabbar Singh was a dacoit. Tax made on Law ,Is this tax dacoity? And the money earned from it goes to schemes like One Rank, One Pension, to burn a gas stove in a poor house.

3- For the first time after independence, a non-Congress party was given mandate by the public & it was BJP government led by PM Modi. In spite of getting absolute majority, we formed government with NDA members

4- During the different governments, the 6 urea factories were closed not taking any care of the factories, but our government started it again. Soil Health Cards have been so far issued to more than 3.5 crore farmers.

5- When the prime minister came with Triple Talaq bills for the protection of Muslim women, the Congress stopped him too. When the elections go on, the public will ask the answer from the Congress why they stopped the OBC bill.

6- After the surgical strike, the view of seeing India in the world has changed. He said that modernization of security forces for internal security is our priority.

7- Many people had come to power in the slogan of poverty, but the Modi government has done the task of removing poverty and lifting the poor living standard. More than 50 million farmers have taken advantage of the Prime Minister's Crop Insurance Scheme in 2016-2017. We have taken several specific steps to double the income of the farmers. After the government's move to join Atal ji's government, the work of linking the rivers was abandoned, which is now started by Modi Government.

8- Providing electricity in every poor house, delivering health services, delivering toilets, providing employment. That is why our Mahanubhavs fought for freedom and I am proud that this government is moving forward in this direction. He said that when we got the rule, 18 thousand villages were such that there was no electricity, we have completed the work of electrifying 16 thousand villages.

9- Nobody gave the appropriate response. In Uri, soldiers were burned alive in their sleep, he says. But unlike others, Prime Minister Narendra Modi had the surgical strike carried out

10- I believe there is a problem of unemployment in the country. We got only 8 years of rule but in 55 years of your rule this problem has not been solved.