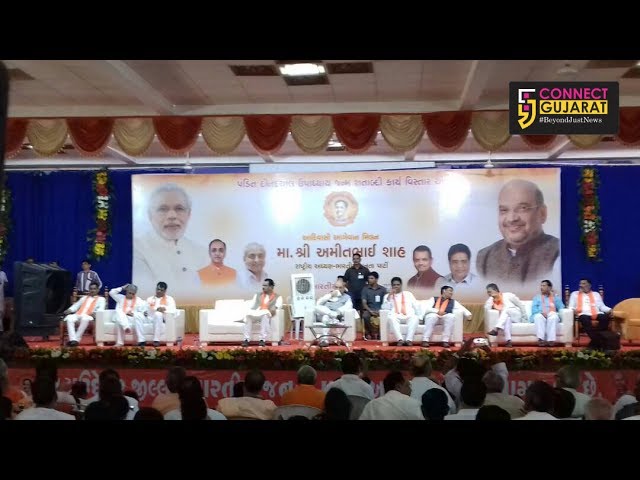 Bhartiya Janta Party National President reached Devaliya village in tribal belt of Chhotaudepur on Wednesday and met the families. He also met the booth in charges and also had typical tribal food along with them. As a preparation to the upcoming elections BJP National president Amit Shah is camping in Gujarat and visiting different places to increase their vote banks. On Wednesday as part of ‘Vistarak’ programme Amit Shah reached Devaliya village in the tribal belt of Chhotaudepur and meet the families there. He was welcomed by the traditional tribal dance and music after reched the village.

He along with top leaders met the tribal villagers specially women and children and interact with them. He patiently heard their queries and assured them of solving them. After a 15 to 20 minutes interaction with the villagers he then met the booth incharges and planned the strategy for the upcoming elections. He met booth incharge and strategically makes plans and asked them to make efforts to won the Devaliya seat in favour of the party. After the meeting the National BJP President Amit Shah tastes the typical tribal style food along with the top BJP leaders.

Later in the house of Popatbhai Rathwa a tribal family, Amit Shah eat the authentic Gujarati style food like Sabzi, Rotla, Thepla, Dal Rice and other dishes along with his team of Jitu Vaghani, Bhupendra Yadav and other leaders. After the food he went straight to Bodeli for the meeting there.

At Bodeli he attended the meeting with Sadhu/ Saints and there he give information about the various schemes of BJP government to the gathering present there. Later he left from Bodeli towards Vadodara where he will address a gathering of intellectuals at Sayajinagar Gruh hall.