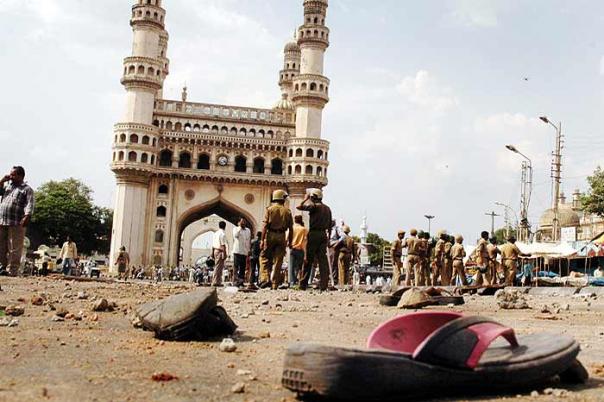 A special anti-terror court here today acquitted right-wing activist Swami Aseemanand and four others in the 2007 Mecca Masjid blast case, ruling that the prosecution failed to prove charges against them.

A massive blast had ripped through the Mecca Masjid on May 8, 2007, during Friday prayers, killing nine people and wounding 58.

Aseemanand’s counsel, J P Sharma, told reporters after the verdict by a metropolitan court for NIA cases that “The prosecution failed to prove allegations against the five accused who faced trial in the case and hence the court acquitted them,”

The case was initially probed by the local police before being transferred to the CBI, and finally in 2011 to the NIA, the country’s premier anti-terror investigation agency.

Ten people with alleged links to Hindu right wing organisations were accused in the case.However, only five of them who were acquitted today faced trial.

Two other accused — Sandeep V Dange and Ramchandra Kalsangra — are absconding, while Sunil Joshi was murdered.

Investigation is continuing against two other accused.

A total of 226 witnesses were examined during the trial and as many as 411 documents exhibited.

Swami Aseemanand and Bharat Mohanlal Rateshwar were out on bail, while three others were lodged in the Central prison here under judicial remand.