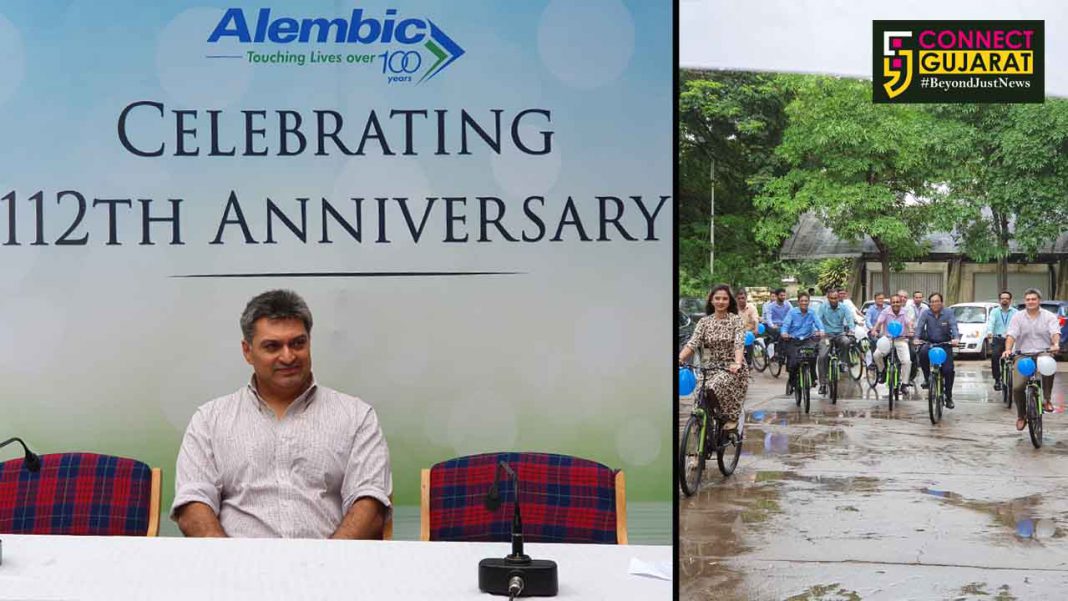 Also pledge to plant 5000 saplings for a greener environment

Taking a major step towards green environment the Alembic group on its foundation day started the concept of sharing a bicycle inside the campus. They also decide to plant 5000 new saplings this year. and also provide food to 12112 people with the help of NGO’s from the city.

As one of India’s oldest pharma companies and Vadodara’s first company, Alembic Pharma has been steadily expanding its business base for years.  But at the same time, the company is doing different things for the collective excellence of Vadodara residents and our Vadodara community.  In this context, three major works were undertaken at this time by the Alembic group for 112 years celebration.

The first one is inauguration of bicycle sharing concept at it’s campus for the first time in Vadodara. The concept is started by Pranav Amin MD Alembic Pharmaceuticals Ltd. riding the bicycle and spreading the message to the employees to turn towards greener way of commuting. The concept is Vadodara’s 1st fully automated bicycle sharing service at the Corporate Campus by MYBYK.  With MYBYK employees can pick cycles from any station within the campus through their smartphone and commute.

For the first time in Vadodara, this kind of bicycle sharing has been started on the Alembic Corporate Campus.  A total of three bicycle points will be raised on the Alembic campus in collaboration with My Bike, Ahmedabad. From now on employees will use the bicycle to get to the office on campus and nearby.  Due to this initiative the use of petrol-diesel vehicles used to move nearby will be eliminated.  Through this special app for bicycle sharing, employees will be able to book their bicycles and after completing the work at any of the three stations on campus, they can submit a bicycle.  The awareness of health among the employees will be increased due to the sharing of the cycle.

The second is planting around 5000 saplings in and around the campus across Vadodara and nearby. In addition to the occasion of the celebration, about 5000 trees have been planted today at the Alembic Campus in Vadodara and at the plants at Panelav, Karkhari and Jarod.  Currently there are 9500 trees at Vadodara Campus, many of which are more than 60 years old.  Last year 1111 trees were planted at Vadodara Campus for a period of 5 years.  Sweet neem seedlings have been ordered.  Which can be planted by employees at home or in societies. This year the such saplings are ordered which can be sow inside the houses ans societies by the company employees. The saplings are of Papaya, Neem, Lemon and Guavas.

The third is meal for 12112 underprivileged people across Vadodara through various NGOs on the foundation day of the company.