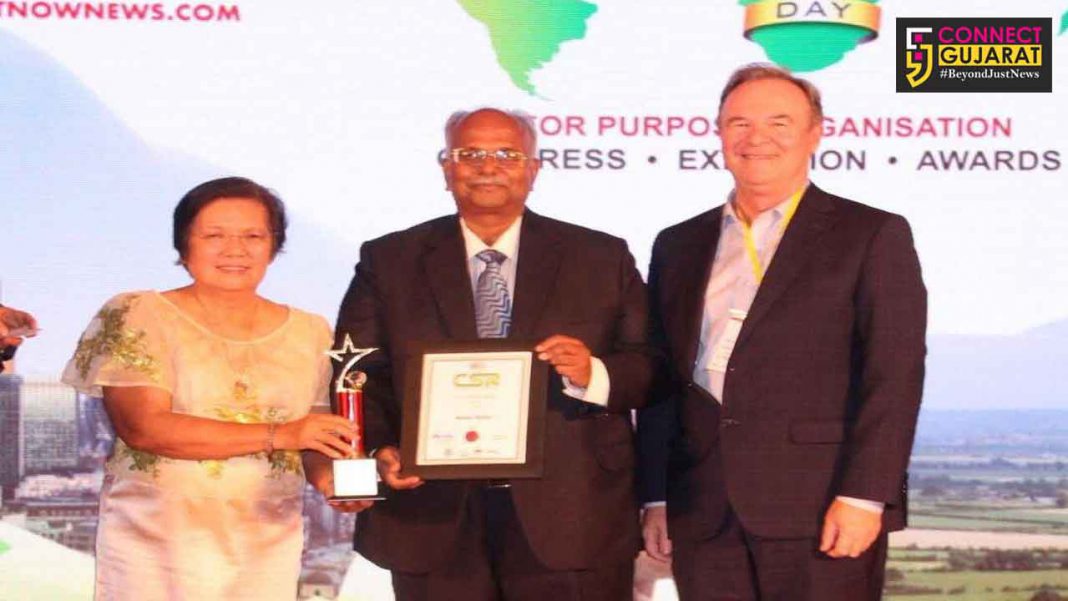 Received the award FOR OUTSTANDING WORK BY WESTERN RAILWAY

Western Railway General Manager A.K. Gupta received prestigious CSR Leadership Award for the outstanding work by the network. In a glittering ceremony at Mumbai the award is in recognition of the outstanding work undertaken towards the socio – economic development of the areas served by Western Railway network. He received the award from
Ms Sally Lee, Mayor, Sarogan City, Philippines & Mr. Pal Sutherland, President & CEO, Sutherland.

Under his guidance the WR played a stellar role in providing a better and safer railway services to passengers, unsurpassed growth in infrastructure and accelerated completion of major projects, thereby serving as a catalyst of socio-economic growth in the areas served by its network.

According to a press release issued by WR CPRO Ravinder Bhakar, W. Rly is having originating earnings of above Rs.16000 crore, with a work force of about one lakh and caters to the states of Maharashtra, Gujarat, Madhya Pradesh and Rajasthan, providing connectivity to these states with rest of the country by movement of passengers and freight through rail network.

Gupta, as the head of Western Railway, through his foresight, planning, management and zeal to provide a better railway to the masses, has undertaken various measures in past few years. Under his leadership, India’s first Broad Gauge AC EMU (local train) was introduced on Mumbai Suburban section of Western Railway. This service has successfully completed one year and as a result more such rakes are being introduced on Western Railway and Central Railway.
It was a long pending demand of people of Mumbai and in the long run, this will redefine the commuting on Mumbai Suburban.

Western Railway runs 1367 services daily carrying 36lakh commuters every day with a density of 60000 commuters per km over its suburban network. The dependency of city on the efficient running of suburban system is tremendous. Several new peaks have been scaled on Western Railway’s suburban system which includes 42 additional daily services, utilising the 5th line for running local trains by making suitable modifications, increasing the number of 15-car trains, upgradation including Foot Over Bridges, Escalators, Lifts and extension of harbour line from Andheri to Goregaon.

Recently one more feat was achieved where a century old Delisle Road Over Bridge near Lower Parel station was brought down in a record time of 11 hours by taking a block on all lines during night time on 2/3 February, 2019. The work force output of Mumbai is highly dependent on punctual running of suburban systems. Due to special emphasis on punctuality, Western Railway has been able to keep punctuality above 96 percent on its suburban system.

Bhakar stated that Railways is a mass carrier and provides the society with a very economical and environment friendly transportation service. It serves every strata of society and on one hand runs Antyodaya trains with unreserved coaches catering to working class while on other hand it runs trains such as Mahamana, Rajdhani catering to the elite. Extending the comforts of premium trains to lower class, the Antyodaya trains are being run by Western Railway, which are fully unreserved having amenities comparable to premium trains. Also, the upgradation of existing trains, which are in non premium category, with premium features under Project ‘Utkrisht’, is being done at a faster pace over Western Railway.

Gupta envisioned and implemented the policy of infrastructure development and network expansion along with environment protection with green initiatives. Doubling and electrification of Udhana – Jalgaon section, thereby connecting Gujarat with Eastern and Southern States through less developed areas of Tapti Valley, was fast tracked and completed in mission mode in record time and opened for traffic.

Similarly, various projects to boost the economy by providing/enhancing connectivity to the ports alongwith several socially important projects like linking of Chhota Udepur with Indore via Dhar for development of tribal areas have also been fast tracked by him. Another important project of gauge conversion of Ahmedabad – Udaipur via Himmatnagar has been fast-tracked and will be completed very soon.

The freight movement, being the backbone of economy, has been another thrust area for Western Railway. Railways is known for providing cheaper and cleaner mode of freight transportation. However, several factors led to shifting of freight traffic to other modes, which are costlier and not so environment friendly. Western Railway diversified its freight basket and included commodities which were earlier transported by other modes. Various initiatives such as Roll On Roll Off services, Dwarf Double Stack containers, dedicated refrigerated vans etc have been introduced. Due to these steps and initiatives, the freight loading of Western Railway was 62.49 million tonnes upto December, 2018 for financial year 2018-19, approx 8.4 per cent higher than the previous year.