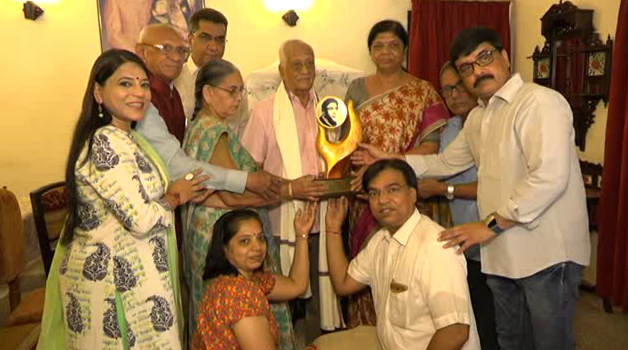 VNM parivaar celebrate the 75th birthday of well known sports A.D. Vyas by starting a award in his name Vadodara. The first award was given to oldest living cricket personality of the country D.K. Gaekwad at his residence.

A.D. Vyas fondly known as ‘Vyas Sir’ is well known for his critical analysis in the sports field specially cricket. He is considered to be the walking encyclopedia of cricket and many sports journalists often contact him for their articles.

On his 75th birthday on 21st May Monday the VNM Parivaar celebrate the occasion by starting a award in his name. The inaugural award was given to D.K. Gaekwad the oldest living cricket personality in the country.

Vadodara MP Ranjan Bhatt handover the trophy to the cricket legend while Indu Vyas wife of late A.D. Vyas offering a shawl to him.

The award is started with his name and will be given annually to the chosen one every year. The VNM Parivaar also decides to release a article written by A.D. Vyas on every Monday on their Facebook and Website to give a tribute to him.