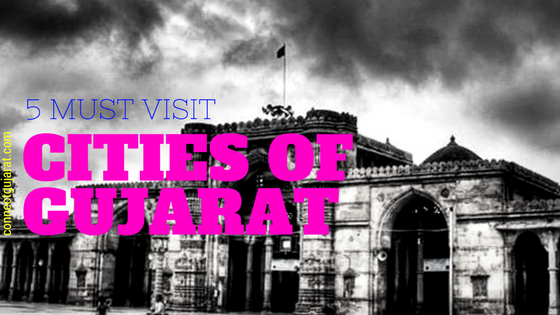 A place in the westernmost part of our country, India, is the once princely yet mighty state of Gujarat. Righteous and fascinating in its own right, the state of Gujarat boasts of culture, heritage, religion, kingship, battles, historical tales and great food for ones appetite of all kinds. A person traveling to Gujarat must make a trip to the foremost cities that dignifies Gujarat the way it is and distinguishes it from other states of the country. So to make it easier for you from choosing from the lot, we shall guide you to pick the top five cities of Gujarat that one must not miss out on. Listed below are the information of the cities and their wonders one might like to know before they head out to Gujarat.

Also known as Amdavad, the city is the largest and is also the former capital of the state of Gujarat. It is the fifth most populous city India and boasts of an amazingly high standard of living of the people residing there. This city is known as the Kankaria Lake, the Chandola Lake, Ahmed Shah’s Mosque and the Sabarmati Ashram among many other likable places to visit.

It is the fourth largest city in the state of Gujarat and is known for its developed industrial sectors. Apart from it, the city is famous for places like the Watson Museum, Kaba Gandhi no Delo (simply meaning the childhood abode of Mahatma Gandhi), Rotary Dolls Museum, the Fun World (which is basically an amusement park) and the Race Course Ground apart from the other places of visit.

To reach Junagadh, one must get off at the Rajkot airport and take a bus or cab to this beautiful city which by far elegant. The city boasts of the historic palace mausoleum MahabatMaqbara,theGirnar (a hilltop and of wildlife refuge), the Sakkarbaug Zoological Garden and the Darbar Hall Museum among others.

The city of Somnath is one hotspot for pilgrimages and tirthas in India for devotees of Lord Shiva. Located in the Saurashtra region of western Gujarat, this city is famous for the Lord Shiva temple where tourists and devotees flock all year round.

The city of Saputara is known for its hill stations and exudes an essence of love and romance. Saputara literally translates to the ‘Abode of serpents,’ is famous for the Saputaramuseum, the Step Garden, Sunset Point, Lake Garden and the Rose Garden among others. Romantic places right?

So next time you visit Gujarat, make a trip down to these amazing cities. Embrace their essence and relish your stay at Gujarat.