Connect Gujarat
#Beyond Just News
More
Home Gujarat 40 Artists from the country paid homage to the Pulwama martyrs through... 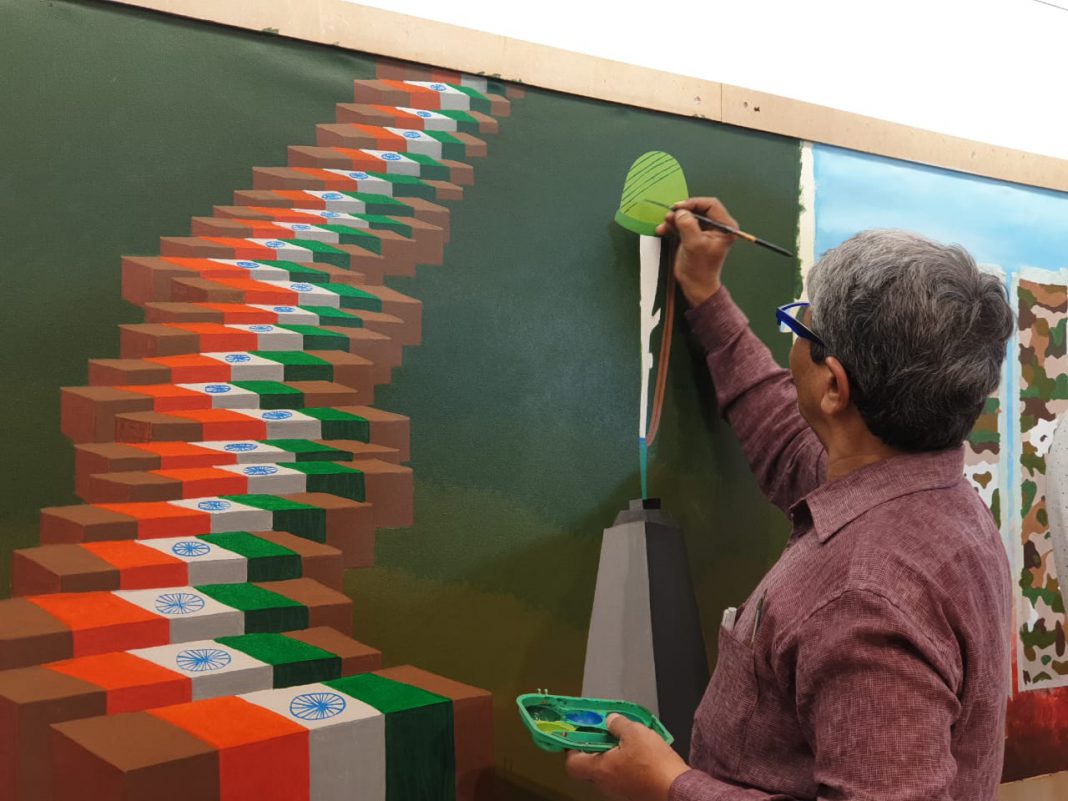 In 24 hour made a scroll painting expressed their reactions after the cowardly attack on the CRPF convoy.

Artists from all across the country paid homage to the Pulwama martyrs through art in a 24 hour event in Vadodara. They all made a scroll painting expressed their reactions after the cowardly attack on the CRPF convoy.  One of its kind marathon event in the country 40 artists from different parts of the country gathered at Sarjan Art gallery to pay homage through art to the martyrs of the terrorist attacks which took place in Pulwama district, J&K. With the help of art the artists show their reactions against the attack and also show their solidarity towards the fight against terrorism.  The artists have voiced together to create one huge artwork which itself is symbolic of our UNITY and says that UNITED WE STAND. Each artist has taken the opportunity very enthusiastically and shared his/her thoughts through symbolic and representation symbols in their artwork.

“The despicable attack which killed 40 CRPF jawans has had an appalling impact on the psyche of all Indians. It has also affected the artists who are even more sensitive members of the society. Through this platform we, the artist community, are offering our tribute to our brave soldiers who have sacrificed their lives in service of the nation, and also offering our condolences to the grieved families,” said Dr. Kanika Mondal curator Sarjan Art gallery. This art event is the first of its kind in India in which artists have been painting all through the 24 hours (day and night) to complete their works. There are 40 participant artists including 27 contemporary artists and 10 budding women artists from Sarjak. In this event each artist painted in a 3×5 ft. space from a large 200 feet canvas scroll which runs through the walls of the gallery.  The painted scroll shall remain on display in the gallery for 5 days (till 28‘h February including Sunday) after a formal inauguration of the show today at 6 pm (on Saturday 23ml February). The camp started from Friday at 12 noon and finished at 12 noon today on Saturday.  “Our artists have painted all through the night to bring their works to completion today which was a challenging task by itself and we hope to convey our message that someday all the hatred and enmity will end and peace and harmony shall prevail in our world,” said Hitesh Rana owner Sarjan Art gallery.  One of artist Ajay Kamwal completed his graduation from Jammu  showed the hatred between the communities which is killing the peace in the valley. “I have painted five blocks representing the religions and how they are fighting with each other to end themselves. I saw very closely the Kashmiri migrants and the terror and requesting to close down the IT troll cell run by the political parties. The issue will be resolved through international intervention and everything must be banned for Pakistan,” said Kamwal.  Neetu Shah from Vadodara draw a picture of PM Narendra Modi and his efforts to fight terrorism. She said war is not the solution and everyone shall unite to stop terrorism. Another artist Maulika Desai originally from Bhilwara Rajasthan draw a painting showing a emotional message to the world. “I show the smoke coming out after the blast and a hand of the soldier with a love letter. The letter may be for his wife, children and nation and he sacrifice his life for the country. The axe in the painting cut the river showing to stop water supply to Pakistan,” said Desai.