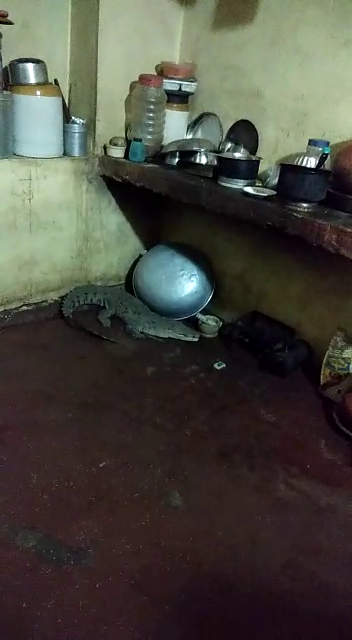 Rescued and released inside Ajwa lake

A family from Rawal village had a shock of lifetime after they saw a 4.5 foot crocodile inside their house. They stand in fear after see the crocodile moves inside the kitchen and they immediately informed the animal activists. They reached the spot and rescued the the croc from the house and later released inside Ajwa lake.

Rescuer Arvind Parmar said they received the call from one Radhika Gohil from Rawal village about presence of crocodile inside her house. They reached the spot and saw the crocodile moves inside the house freely and rescued it.

The crocodile might enter the house around midnight and the family get to know about it in the morning. Locals also reached the spot after the news and shocked to see the 4.5 foot long crocodile moved freely inside the house.