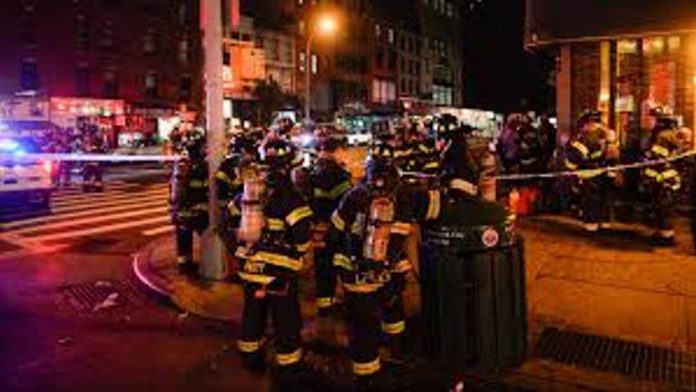 Twenty-nine persons were injured in an explosion in New York city on Saturday night, the incident the mayor said was not linked to terrorism but appeared to have been an “intentional act”.

The explosion on West 23rd Street between 6th and 7th Avenues in the neighbourhood of Chelsea was reported at around 9 p.m., NBC News reported.

“There is no evidence at this point of a terror connection to this incident,” Mayor Bill de Blasio told reporters at a press conference, stressing that the investigation was in its early stages.

“The initial indication is this was an intentional act,” he added.

Sources told NBC New York that investigators at the second location were examining what appeared to be a pressure cooker left out on the sidewalk on 27th Street.

It has not been confirmed that the object is an explosive device. The bomb squad was investigating.

The NYPD said the blast in Chelsea appeared to come from inside a large trash bin, and photos on social media appeared to show a bin mangled in the explosion, but Commissioner James O’Neill said the explosion was believed to have occurred on the street.

The exact nature and cause of the blast has not been determined, O’Neill said, adding the explosion was captured on video.

“We do have video, and we see the explosion. No arrests were made,” he added.