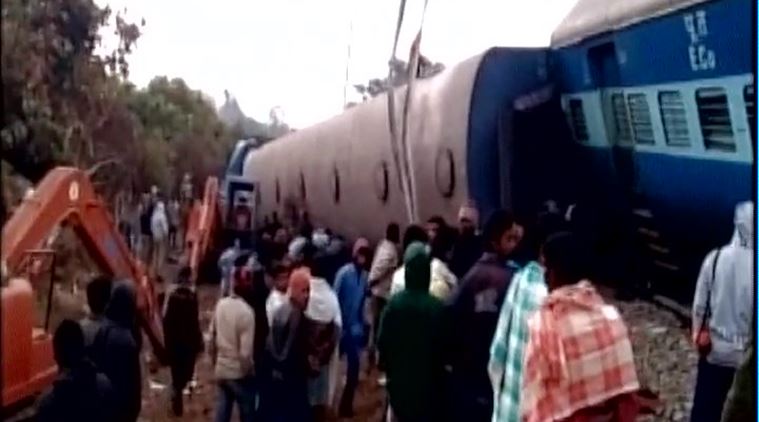 At least 39 people were killed and 50 injured when the Jagdalpur-Bhubaneswar Hirakhand Express derailed in Andhra Pradesh’s Vizianagaram district, police said on Sunday.

The incident occurred on Saturday at 11.30 p.m. near Kuneru station, 24 km from Rayagada in Odisha. The train was on its way to the Odisha capital Bhubaneswar from Jagdalpur in Chhattisgarh.

“Four accident relief vans have been sent to the accident site. The reason behind the incident is yet to be ascertained,” Mishra said.

Army personnel were deployed for the rescue work, which was in full swing and entered the final stage, the Railway Ministry said on Sunday evening.

According to the railways, 13 unaffected coaches left the accident site carrying 300 passengers to Bhubaneswar via Sambalpur and Angul.

About 500 stranded passengers were taken to their destinations by buses.

Officials said the injured were shifted to hospitals through medical relief trains and ambulances.

They said 22 injured were taken to the Parvathipuram government hospital. Seven patients were referred to Kin George Hospital in Visakhapatnam. Seven were discharged after first aid.

Some injured were brought to the Rayagada district hospital.

Rescue workers worked through the night to locate the trapped passengers and pull them out of the wreckage.

Railway Minister Suresh Prabhu rushed to the accident site. He met the anguished relatives of the deceased. He also called on the injured.

Prime Minister Narendra Modi expressed shock over the accident. “My thoughts are with those who lost their loved ones,” he said and prayed for their speedy recovery.

An inquiry by the Commissioner of Railway Safety has been ordered.

A railway official in New Delhi said sabotage cannot be ruled out. But Odisha Police rules this out.

The railways have announced Rs 2 lakh ex-gratia each for the next of the kin of the deceased and Rs 50,000 each for the injured.

The Andhra government announced Rs 5 lakh each for the next of kin of the deceased.

The train had departed from Jagdalpur at 3 p.m. on Saturday and was scheduled to reach Bhubaneswar at 8.25 a.m. on Sunday.

It ran off the track minutes after it left Odisha and entered Andhra Pradesh, from where it would have re-entered Odisha.

This is the latest in a series of train accidents in last two months.

In November 2016, 149 people died after 14 coaches of the Patna-Indore Express derailed near Pukhraya station in Uttar Pradesh’s Kanpur district.

Last month, two people were killed and over 60 injured, some seriously, when 15 coaches of the Ajmer-Sealdah Express derailed near Kanpur.

Following Saturday’s accident, train services have been suspended on the route. Some trains were cancelled or diverted.