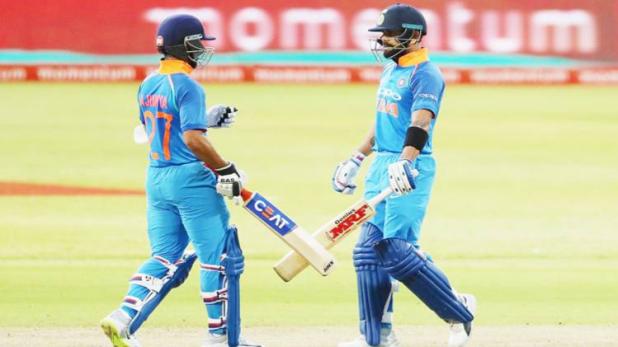 An unbeaten century from skipper Virat Kohli and steady batting by Ajinkya Rahane propelled India to a six-wicket victory in the first One-Day International against South Africa here on Thursday.

Kohli and Rahane came together after the early departure of openers Rohit Sharma and Shikhar Dhawan to put together a stand of 189 runs.

Kohli scored 112 runs off 119 deliveries which included 10 hits to the fence while Rahane scored a steady 79 off 86 balls.

The duo batted the hosts out of the game and by the time Rahane was dismissed by South Africa pacer Andile Phehlukwayo in the 43rd over, the Indians were virtually assured of a comfortable victory.

The visitors had started their chase on a shaky note when an attempted slog by Rohit off Morne Morkel's bowling handed an easy catch to South Africa wicket-keeper Quinton de Kock.

Dhawan also went back to the pavilion soon after, caught short of his crease while attempting a quick single thanks to an excellent bit of fielding by Aiden Markram.

But if the Proteas had entertained visions of victory at that point, it was quickly extinguished by Kohli and Rahane.

Earlier, skipper Faf du Plessis' ninth ODI century helped South Africa recover from a minor collapse to post a competitive 269/8 against India in the opener of the six-match One-day International series at Kingsmead here on Thursday.

Coming in at number 3, du Plessis (120 off 112 balls; 4X11, 6X2) steered the South African ship with three vital half-century partnerships even as the Indian wrist spin duo of chinaman Kuldeep Yadav (3/34) and leggie Yuzvendra Chahal (2/45) shared five wickets between them to rip through the top order.

Electing to bat after winning the toss, South Africa got off to a patient 30-run start before Jasprit Bumrah's sharp inswinger trapped opener Hashim Amla (16 off 17 balls; 4X1) plumb in front.

The captain started well by punishing pacer Bhuvneshwar Kumar for three consecutive boundaries as the second wicket stand started flourishing to 83/1 until Chahal struck with the wicket of de Kock, trapped in front before jolting the hosts with the wicket of Aiden Markram (9 off 21), thanks to a brilliant running catch from Hardik Pandya.

Kuldeep then joined the party with the quick dismissals of Jean Paul Duminy (12 off 18) and David Miller (7 off 7) even as du Plessis looked comfortable driving Kuldeep for a couple of runs through extra cover to bring up his 30th ODI fifty.

Duminy found the going tough against the chinaman before a googly, which kept low, broke through his defences leaving the Proteas struggling at 122/4.

Miller, who walked in next, too struggled against the unorthodox Kuldeep and all he could manage was a drive to skipper Virat Kohli, who completed an excellent catch, diving forward at short cover.

Kohli, who had previously sustained a knock, had returned to the field after nursing the bruise and positioned himself closer to the batsman, which helped him complete Miller's catch cleanly.

Tottering at 134/5, the Proteas needed a big partnership to bail them out and all-rounder Chris Morris (37 off 43; 4X4, 6X1) provided the much-needed impetus to the innings by forging a 74-run sixth wicket stand in the company of his captain.

Morris looked in great nick throughout his knock, and even took Kuldeep to the cleaners once before being cleaned up two balls later.

Du Plessis, meanwhile survived a few close chances before reaching his century off a single from Bhuvneshwar Kumar, and later in the company of Andile Phehlukwayo (27 not out off 33; 4X1, 6X1) raised a 56-run seventh wicket stand.

The skipper fell in the final over of the innings while attempting to take Bhuvneshwar to the cleaners and instead holed out to Hardik at the long-off boundary even as the incoming batsmen -- Kagiso Rabada (1) and Morne Morkel (0 not out) hardly disturbed the scorers.