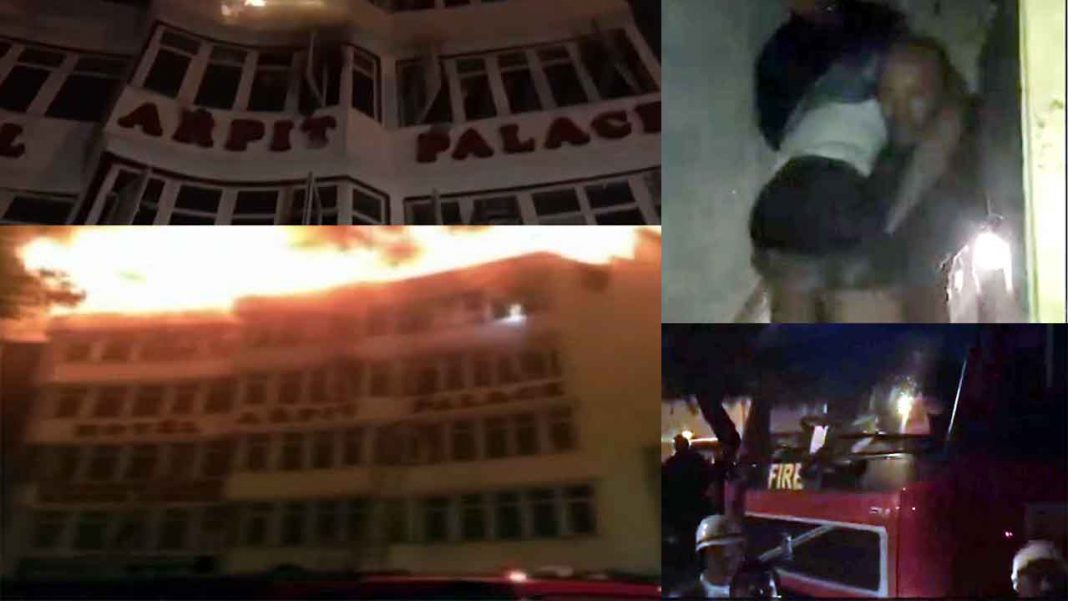 At least 17 people were killed as a massive fire broke out at Hotel Arpit Palace in Karol Bagh in the national capital early in the morning on Tuesday.

A woman and a child, among those dead, were killed when they tried jumping from a window, reports said.

According to the fire services department, 35 people were injured in the blaze and have been taken to nearby hospitals. Most of the sixty people in the hotel were sleeping when the fire broke out.

Police officials said most of the deaths were due to suffocation.

Delhi Fire services director GC Mishra told News18 that the department received a call about the blaze around 4:30 am. He said the fire started from the fourth floor of the hotel and spread till the second floor, while the ground floor and basement remained unaffected.

Thick smoke and huge flames could be seen emanating from the top floor of the 40-room hotel till around 7 am.

Mishra said that the department received the call late and the fire had already spread, hampering the rescue operations. He said twenty fire tenders were rushed to the spot immediately.

Fire officer said there was wooden panelling on corridor, because of which people couldn’t use corridors to evacuate and said two persons had to jump off the building.

The cause of the fire is still unknown, but sources said that prima facie it looks to be a short circuit. The Delhi government has ordered a probe into the incident.

“The hotel had clearance only for four floors. They had made a kitchen and terrace on top of it. This is major case of carelessness. Investigation is on. Strict action will be taken against the guilty,” Delhi minister Satyendar Jain, who visited the site, said.

Prime Minister Narendra Modi said he was deeply saddened by the loss of lives due to the fire. “I convey my condolences to the families of those who lost their lives. May the injured recover soon,” he said via a tweet.

WR to run one more parcel train between Okha and Changsari...

Major door to door surveillance in Vadodara starting from Wednesday