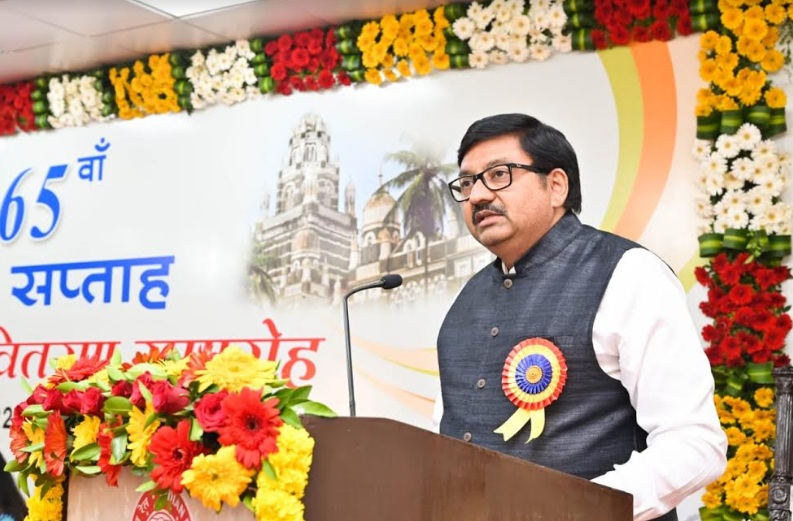 43467/Railway Week function is celebrated to acknowledge dedication and work culture of WR’s team of officers and employees who always rise to the occasion to face toughest of challenges to face challenges. Best performing staff & officers from last financial year are awarded for their outstanding contribution. It not only encourages the officers & staff to give their best, but also inspires & motivates others to put their best foot forward in the coming year.

GM Kansal conferred 26 Efficiency Shields to the Divisions & the Units which have been adjudged the most efficient in various fields for the year 2019-20. This year a new Shield has been introduced by GM/WR which has been presented to the Division which has seen optimum improvement as compared to last year and the first place of this maiden Shield has been conferred to Rajkot Division, while the 2nd place was conferred to Bhavnagar division.

The most prestigious and coveted General Manager’s Overall Efficiency Shield for 2019-2020 for best overall performance, has been bagged jointly by Ratlam & Ahmedabad Divisions. Kansal presented this Shield to both Divisional Railway Managers of Ratlam and Ahmedabad Divisions. On this momentous occasion, Alok Kansal presented the Efficiency Medal, Certificate of Merit & Cash Awards to 155 meritorious officers and employees.

Tanuja Kansal – President of Western Railway Women Welfare Organisation (WRWWO), Additional General Manager of W.Rly, Vice President of WRWWO along with Principal Heads of Departments, other senior officers and awardees remain present during the occasion. Keeping with the Covid 19 protocol, few awardee officers and staff working at headquarter office were felicitated at Rail Nikunj- Mumbai Central, whereas the others were felicitated through virtual platform.

WR has also bagged the Civil Engineering, Security Shield and Sales Management Shield at the Railway Board level. Thakur further stated that a remarkable feat by winning the National Level Silver Award announced by the Quality Council of India for its “Push Pull Operation” project.

Western Railway also bagged three prestigious National Energy Conservation Awards (NECA) in ‘Transport’ and ‘Building – Govt offices’ categories for the year 2020 instituted by the Bureau of Energy Efficiency (BEE), Ministry of Power. Western Railway has been awarded the First Prize in the Transportation Category along with First and Third prize in Buildings Category for Divisional Railway Manager’s offices at Bhavnagar and Rajkot respectively.

Kansal added that WR has converted challenges into opportunities and various infrastructural works have been undertaken during the lockdown period, which otherwise would require long periods of blocks. He informed that CRS inspection and speed trial of Dabhoi – Chandod section has been successfully completed and the work on the new line between Chandod and Kevadiya as well as of new Kevadiya station is going on at war footing. The work is expected to be completed by the year end. This will cater as seamless access railhead point to the tourists visiting the iconic Statue of Unity at Kevadiya.

Kansal further stated that WR has ensured to keep the supply chain of essential commodities rolling and loaded more than 54 Million tonnes of goods. 748 parcel special trains have been run. Recently, WR crossed the Rs 100 crore mark through overall parcel booking which contributes more than 20% of the total earning of Indian Railways in this segment. Through its 137 milk special trains, WR has transported more than 10.06 crore litre of milk, highest on IR.

In order to help farmers in transporting their agricultural produce economically to new markets & thereby opening new avenues for them and to get the right price for their crops, 9 Kisan Rails have departed from WR till now. Kansal also appreciated the efforts of Western Railway Women’s Welfare Organisation (WRWWO) for their constant support through welfare works and to serve the diverse & innumerable welfare requirements of Western Railway Staff.

Principal Chief Personnel Officer of WR welcomed the guests. Dy. General Manager (G) proposed the vote of thanks. A cultural programme was performed & a corporate film on Western Railway’s major achievements was also screened on this occasion.