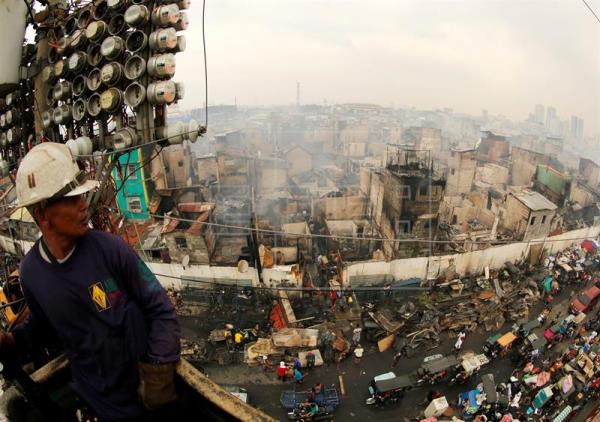 Around 15,000 people in the Philippines took to the streets in a slum here on Wednesday after a fire, lasting for more than six hours, razed entire rows of houses, a media report said.

The fire, which swept through Parola town of Tondo district, started around midnight on Tuesday and gutted some 1,200 homes. It caused roughly 6 million pesos ($120,400) in damage before the fire was extinguished by firefighters around 7.30 a.m., according to Bureau of Fire Protection, Efe news reported.

Though up to 90 fire trucks were dispatched in an attempt to douse the flames, many of the displaced residents expressed anger over the alleged slowness of the response by the firefighting crews.

The government has set up three temporary evacuation centres in the vicinity, but many residents say they cannot go because they need ID cards to register and their records were all burned in the fire.

Though the origins of the fire are still not known, authorities suspect it could have been caused by a poorly wired power cord or an unattended gas stove.