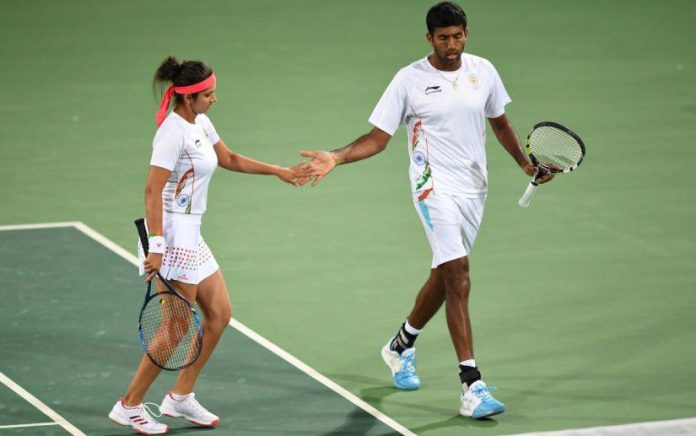 Rio Olympics Aug 13, the Indian mixed doubles combination of Sania Mirza and Rohan Bopanna are just a single win away from an Olympic medal.

The in-form fourth seeded duo entered the semi-finals by defeating Andy Murray and Heather Watson of Britain 6-4, 6-4 in one hour and seven minutes at Court 2 of the Olympic Tennis Centre here on Friday.

Sania and Bopanna are expected to face a tough challenge in their next match as they will take on the US team of Venus Williams and Rajeev Ram for a place in the final.

“We still think we can improve as every round becomes tougher from here on. We played two amazing champions today and we look forward to playing champions, whoever it is, tomorrow,” Sania said after their match.

Added to this she also said, “Everyday is a new day. Yes we are confident after beating Andy but in the end we have to forget the emotion what happened and give our best again by staying fresh,”

“But in tennis, everyday is a new day and every match is a tough match. Next one is going to be tough too. Hopefully, we will have a great game tomorrow.”

Murray was clearly struggling with his fitness after having played a gruelling men’s singles match earlier on Friday and Sania admitted that containing him was the key to winning the match.

“We saw Andy’s match last night and our gameplan was to try and take him out of the game as much as possible and play to his weakness, if he has a weakness. It was also to take the ball as much as possible to Heather. Andy was serving and volleying and for me that’s a good target,” Sania said.

Bopanna on his part, felt that Murray was not at the top of his game which helped the Indians to dominate proceedings.

“Andy missed a few first serves and we capitalised on it. There was a lot of pressure on Andy since he was covering three-fourths of the court. You can’t say there were weak points with Heather. What we had to do was keep away from the strong man,” the Karnataka lad said.

“The conditions today were favourable. It was not so windy even though Andy Murray was playing amazing tennis. The only way to win the game was to keep Andy away from the ball. And Sania hit the ball very well and helped me move well too. I also served very well today. Luckily we got a clean match in straight sets,” he added.

Both Bopanna and Sania opined that their on court co-ordination was also a huge advantage.

“Communication is the key in mixed doubles and it was better for me to call early so that there is no miscommunication with the partner. And that’s the way we played,” he said.

“I think Andy’s fantastic. He takes big leaps into returning and he sees the ball very early and returns it fast. You have to play a lot of mind games in mixed doubles and hustle your opponent. But Andy is such smart player that to outthink him is not easy. He is one of the fittest players so we had to go ahead and stick to our gameplan.”

“A win gives you a lot of boost, but every day is new day and we will come out and fight again tomorrow and give it our best. I and Rohan have a good chemistry and we have a lot of fun on the court and fight well together,” Sania chipped in.

“It helps that we know each other off the court as well. Even in an intense situation we help each other very well.”

Sania asserted that the Indians specifically targetted Watson as they felt that she was the weaker partner in the British team.

“We wanted to put pressure on the girl especially. She just won one point in the first two games. That played on her mind I think. We played better than yesterday. It’s a lot of fun with him, even during an intense situation,” she said.

“In a mixed doubles match the girl is going to get most of the balls. I know that as a girl I am going to be attacked no matter what happens. So it was with Heather. As a girl you have to expect that because the guys are serving better and hitting harder. Of course, if an opponent has a weakness, like a weak backhand, we will go there,” she added.

“My returns also worked very well and I was hitting fast and deep, and Andy had to help Heather there. Our gameplan worked well today.”

Sania asserted that she was satisfied with her performance on Friday, adding that they will need another superb performance in the last four stage.

“I was returning better today and Rohan is such a solid player. We win most of the time with his serves, unless I do something stupid. We had gameplan and we stuck to it,” she said.

“Yes we ran into each other on two occasions when he wanted to take my forehand really badly and at one point when I had to get out of the way and did not move out fast. The reaction time on the court is in milliseconds.

Sania, who is the World No.1 in women’s doubles, asserted that the Indian duo still have a lot of work to do before they can be assured of a medal.

“A win gives you a lot of boost, but every day is new day and we will come out and fight again tomorrow and give it our best. I and Rohan have a good chemistry and we have a lot of fun on the court and fight well together. It helps that we know each other off the court as well. Even in an intense situation we help each other very well,” she said.