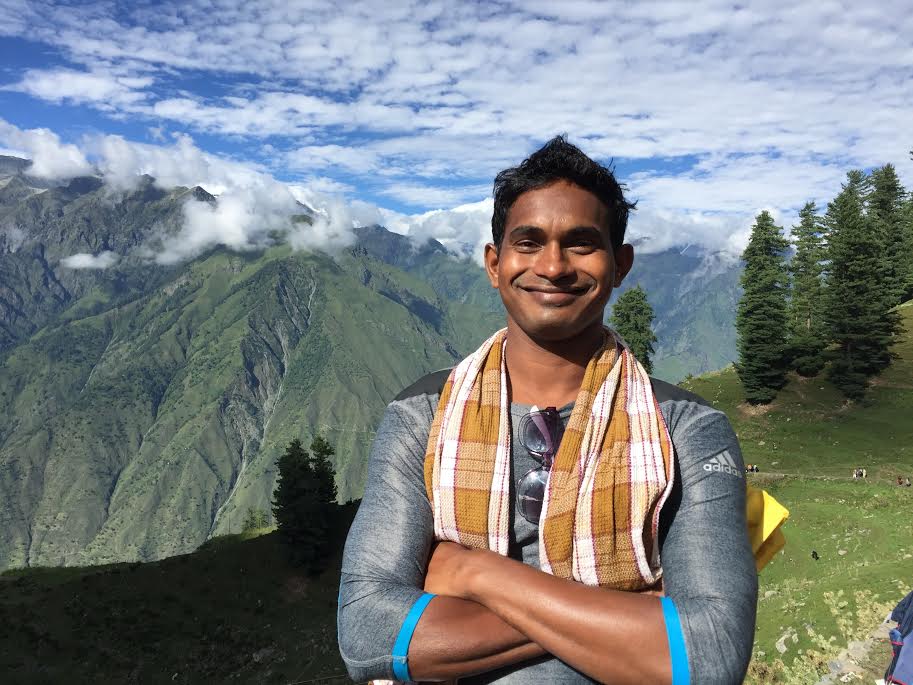 Maripelly praveen originally from Telangana State moved to Vadodara for his Master Degree in Print making from MSU Fine Arts Faculty 2007-09. He lost his parents at a very young age and went into depression. However after move in to Baroda he took the help of Yoga, which helps him to get out from the depression and control his life.
’I moved in the city to complete my Masters degree in Print Making from Fine Arts which I have completed and afterwards also receieved National Akademy Award (2009) by Lalit Kala Academy, Government of India.

He obtained Yoga Teacher Training Course (YTTC) in 2010 from Yogniketan,Vadodara.Since then he is offering services at Yoganiketan,” said Praveen. Praveen is also a master in Suryanamaskar and for the past many years and also mastered in the arts. He makes it a point to do 108 Suryanamaskar daily every morning. Now he is on a mission to spread Yoga and Suryanamaskar all across the world. To spread the message is more effectively. He has performed 108 Suryanamaskar at the high altitude (5360 meters) of Everest Base Camp. After gain the confidence from his first ever experience he decided to perform it even more higher and that too at the Everest base camp. “The high altitude always challenged you as the breathing problem and teeth shattering cold is there to welcome you. I start from 14th April from Kathmandu and reached the Everest base camp at 22nd April. In between to set the tempo I have performed 14 times 108 Suryanamaskar during the whole trekking (Total 1512 suryanamskar),” said Praveen.

After reached the base camp Praveen have performed 108 Suryanamaskar early in the morning after seven kilometers walk from Gorakshep. “I reached the place where I found a little passage and spread the Yoga mat. The place is 5360mts above sea level with temperature down to minus 15 degrees. The effective Oxygen was 11% and to control breath was a challenge. But I complete 108 Suryanamsakar in just 27 minutes and the most incredible thing is that Yoga helped me to control the breath,” said Praveen. After the feat Praveen is now aiming for high and wants to perform Suryanamaskar even in higher altitude. “After the Everest base camp feat now my Dream is to do Suryanamaskar at 6000mts and with technical expertise. I also want spread Yoga and Suryanamaskar all across the world.

He got the admission at world-renowned University of Wisconsin-Madison (USA) and waiting for scholarship to do research in Art, Science and Yoga.

Praveen now is practicing hard alongside 108 people to prepare them to achieve the rare feat before the International Yoga day. “As a pre event one day before the International Yoga Day 108 persons will perform 108 Suryanamaskar at the Brahmamuhurat (4:30 a.m.). The persons who are going to do Suryanamaskar will do it for the firrst time including age group from 12 to 76 year old. All can do l, 39, 968 moves in 90 minutes during the performance of Sun Salutations,” said Praveen.