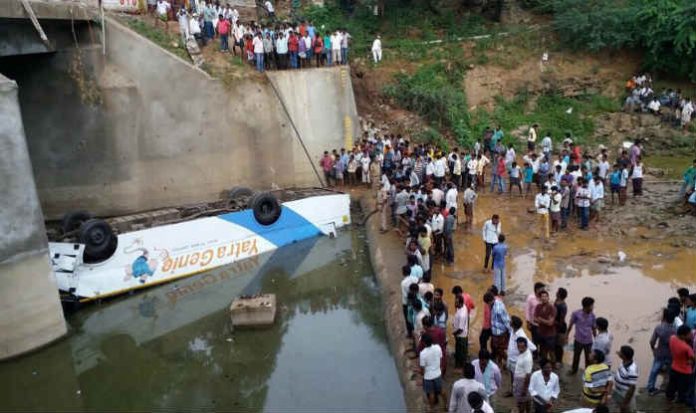 As per the local police sources at least 10 persons were killed and 18 injured when a bus fell into a canal in Telangana’s Khammam district early on Monday.

The accident occurred near Nayakangudem when the bus lost control and fell off a bridge on Nagarjunasagar canal.

The bus of a private travel company was on its way from Hyderabad to Kakinada in East Godavari district of Andhra Pradesh.

According to the police, seven persons were killed on the spot while three died in the hospital. All the injured were admitted to government-run hospital in Khammam.

The survivors told the police that the negligence by the driver led to the accident.

According to them, the driver was running the vehicle at a high speed and applied sudden brake on reaching the bridge. The bus overturned and fell into the canal.

There were 31 passengers aboard the bus which had left Hyderabad around 11.30 p.m. on Sunday.